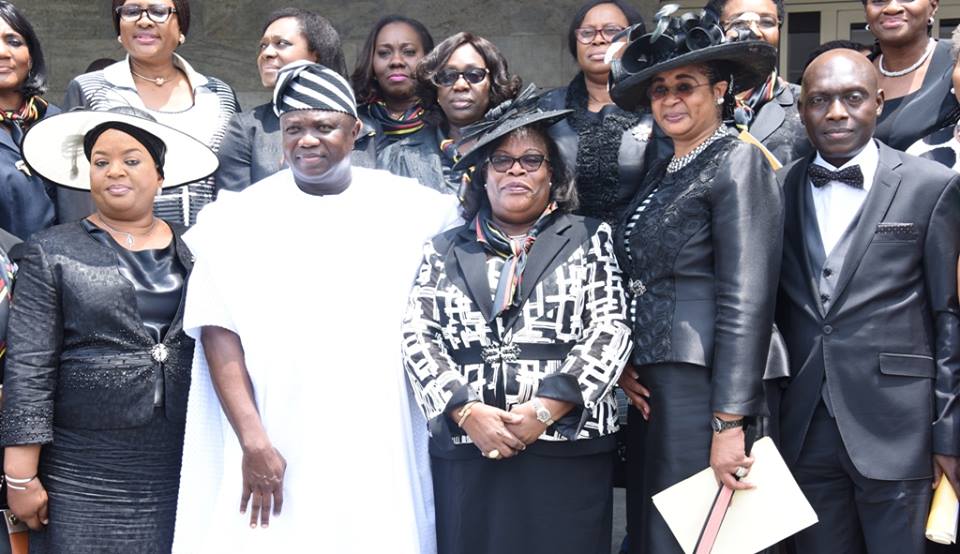 Governor  Akinwunmi Ambode on Wednesday swore in three new judges into the State Judiciary, with a charge on them to maintain a high standard of professional competence and integrity to be able to dispense justice to all manners of people without fear or favour, affection or ill will.

Speaking at the Banquet Hall of Lagos House in Ikeja, venue of the ceremony, Governor Ambode said the swearing in of the judges, which was the first of his administration, signified another milestone in his commitment to enhance the quality of life of the people through a justice administration system that is just and fair.

He said over the years, the State Judiciary, apart from being the busiest and most vibrant in the country, had established a reputation for itself as a trail blazer in the entire federation with intellectual judicial pronouncements that have stood the test of time at appellate courts, hence the new judges must also contribute positively to the advancement of administration of justice.

The Governor added that the niche which the State Judiciary had carved for itself over the years was achieved through various reforms that were initiated and faithfully implemented by succeeding leaderships of the State Judiciary in partnership with Executive and Legislature, and pledged that his administration would initiative key reforms in the sector especially in areas of infrastructure, technology, people and processes and improved welfare for the judiciary.

He said the reforms would be based on the recommendations of the recently held Justice Summit by the State’s Ministry of Justice which brought together several stakeholders in the justice sector.

He said: “I congratulate the newly appointed judges for being adjudged fit and proper persons to be on the respected higher bench of the busiest and most vibrant State judiciary in the country.

“In the end, we hope to bequeath a more vibrant and qualitative judiciary and justice sector fit for the 21st century and beyond. It is also my hope that with the caliber and qualities of these new learned personalities, our bench will be further enriched to effectively discharged its constitutional functions and deliver hope and justice to our people.

“My lords, may I remind you that by these appointments, your conducts and carriage will become subject of public scrutiny. You must therefore maintain a high standard of professional competence and integrity to be able to dispense justice to all manners of people without fear or favour, affection or ill will,” Governor Ambode said.

Earlier, the State’s Chief Judge, Justice Olufunmilayo Atilade thanked Governor Ambode for approving the exercise that led to the appointment of the judges, as well as other stakeholders who contributed in the painstaking appointment process.

Besides, the CJ also urged the Chief Justice of Nigeria (CJN), Justice Walter Onnoghen to approve the appointment of more judges for Lagos State Judiciary, being the busiest in the country.

“On the average, a judge in Lagos has over 500 to 600 cases in his or her docket. I was talking with the Chief Judge of Ekiti State the other time and I was told that the whole of the Judiciary of the State has just 400 cases. So, I like to renew my call to the CJN to approve more judges for us and I also urge Governor Ambode to approve another appointment process,” Justice Atilade said.

She also urged the newly appointed judges to embrace hard work and dispense justice without fear or favour.

Responding on behalf of the appointees, Justice Alakija thanked Governor Ambode for their appointments, and pledged that they would carry out their duties diligently and abide by the code of conduct.

My Husband Compares Me to A Pig, Divorce Seeking Woman Tells...

G20 SANs on the Move to Sanitise the Nation’s Judiciary