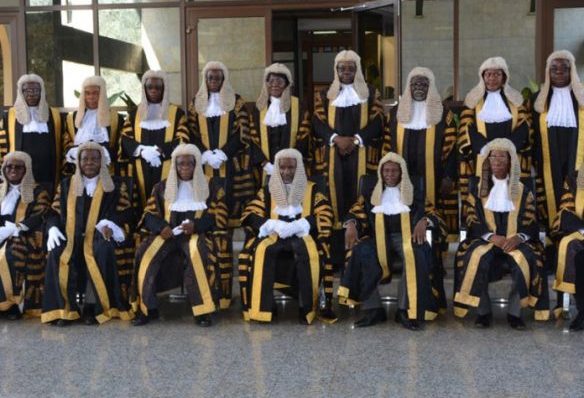 In a landmark judgment delivered on 15th December, 2017, the Apex Court has by a full court of seven justices of the Supreme Court affirmed its earlier decision in the locus classicus case of Okafor v. Nweke to the effect that only a legal practitioner whose name appears on the Roll of the Supreme Court, can competently sign any process to be filed in court.

In the appeal, the issue of proper person to sign processes to be filed in court, had come up for review and determination. The appellants in the case, are seeking to set aside the judgment of the court of appeal, on the grounds, amongst others, that the notice of appeal was not properly signed by a legal practitioner known to law, in that it was signed “& Co.”

In many of its decisions starting from the case of Okafor v Nweke, the Supreme Court has maintained that only a legal practitioner whose name appears on the Roll of the Supreme Court, can competently sign any process to be filed in court.

Upon being served with the appellants’ brief in the case, settled by Afolabi Kuti, Esq., the respondent, thorough his counsel, Ebun-Olu Adegboruwa, Esq., requested for the convening of the Full Court of the Supreme Court, to determine the crucial issues arising in the appeal.

The respondent urged the Supreme Court to depart from all its previous decisions on the point, on a number of grounds. First he contended that the court did not avert it’s mind to the 1968 decision of the Supreme Court in the case of Cole v Martins where the court held that  a process signed by “Lardner & Co.” cannot be said to be defective when the author was sufficiently identifiable and traceable and no possible doubt or confusion can arise from his description as such, in deciding the case of Okafor v Nweke, and indeed in many of the decisions that followed it.

The respondent also contended that section 2 of the Legal Practitioners Act has been wrongly interpreted to guide the practice and procedure of the courts, especially in relation to the filing of court processes, whereas the purport of the Act is simply to regulate legal practice outside and beyond the courts.

In the alternative, the respondent urged the court to consider the effect of section 4(9) of the 1999 Constitution, which prohibits retroactive legislation, to apply it to judicial proceedings, and thereby limit the application of Okafor v Nweke and the cases following it, to the dates of those cases, instead of the current practice whereby these cases are being deployed to wake up dead and concluded cases from their well-deserved judicial graves.

The respondent also sought a departure on the ground that these decisions are contrary to public policy of not permitting the trade practice of lawyers to affect the innocent litigants, who are not conversant with the style and procedure of signing and filing of court processes.

The appeal which was heard by the Supreme Court panel of seven justices on September 26, 2017 was led by the Honourable Justice Mary Odili, JSC.

“The court is not persuaded by the argument of the Respondent that it should depart from its earlier decision in Okafor v Nweke, that it is only a legal practitioner whose name appears on the Roll of the Supreme Court, can competently sign any process to be filed in court…Consequently, the appeal filed succeeded on the ground that notice of appeal for which the Respondent had earlier secured judgment at the Court of Appeal was incompetent.”

Drug Trafficking: DCP Abba Kyari, 6 others to be Arraigned Today