It would appear that the “WAKA” Concert which was initially displayed on the NBA Conference website has been changed to “SARO” concert. a member of the NBA Mr. Ellias Olatunde Ajadi who registered to watch the “WAKA” concert brought this to DNL Legal and Style attention. Read his complaint below:

At the time of registering for the NBA AGC 2017, participants have options to register for individual events including Presidential Dinner, “Waka” the award winning musical, and unBARred concert.

In my own case, I registered for the musical in the regular category and paid N 2000 for same. I chose the musical because prior to the AGC announcement, I have read rave reviews about the musical.

Habitually, I regularly visit/check my registration portal on the conference website. Just this evening, to my shock and surprise, the musical had changed from “Waka” to ” Saro” the musical. I doubt if the two are one and the same.

I never bargained for Saro cause I have never heard of same until now. Would this sudden change without prior notification not amount to breach by the conference organizers? 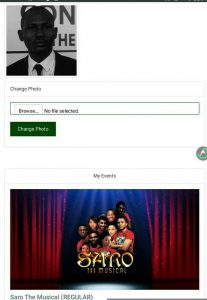 To confirm the above assertion we checked the NBA Conference portal and have now confirmed that “WAKA” the Musical has been exchanged with “SARO” the Musical.

While SARO the Musical is a dance drama performance which debuted sometime in  October, 2013 WAKA The Musical debuted two years after in 2015. Although the  two concerts are dance drama, the story line are clearly not the same.

It would have been appropriate for the TCCP to announce a change in the concert earlier indicated. This is also a similar case with Law Pavilion which was advertised as the provider of the one year subscription but recently without any explanation, this has also been changed to other law report providers.

Would this be a case of breach of representation?