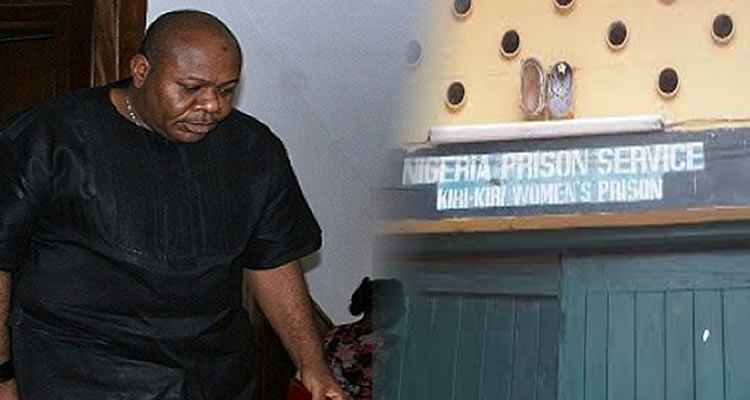 Fred Ajudua, on Monday in Lagos challenged the Economic and Financial Crimes Commission (EFCC) over a 4.8 million dollars fraud charge it filed against him at the Lagos High Court.

Ajudua, who challenged the right of the commission to prosecute him for defrauding a former Chief of Army Staff, retired Lt.-Gen. Ishaya Bamaiyi, is also challenging the jurisdiction of an Ikeja High Court to try the case.

The EFCC had accused Ajudua of defrauding Bamaiyi while both were in prison custody in 2004 for different offences. EFCC said Ajudua had approached Bamaiyi, who was facing trial for the attempted murder of Mr Alex Ibru, the late publisher of the Guardian Newspaper, and convinced him that he could help to secure his freedom.

According to the commission, Ajudua received 4.8 million dollars from Bamaiyi under the guise that the money was the legal fees for the law firm of Chief Afe Babalola and Co.

Ronke Rosulu, a court registrar and Ajudua’s alleged accomplice, who helped him funneled the funds from the prison, was sentenced in a separate trial on Dec. 21, 2005 to 10 years in prison by Justice Lateef Lawal-Akapo.

During Monday’s proceeding, counsel to Ajudua, Mr Norrison Quakers, in an application dated Jan. 6 challenged the jurisdiction of the court to hear the case. He also urged the court to quash the charge brought against Ajudua by the EFCC.

“We have filed an affidavit and a reply on points of law challenging the jurisdiction of this court to hear this case. “The law also provides that an information in this charge can only be filed by the Attorney-General of the state and not the EFCC,” he said.

Responding, counsel to the EFCC, Mr S.A. Atteh, said there was a judgment of the Court of Appeal upholding the right of the EFCC to prosecute the case. “We have filed a counter-affidavit dated Feb. 9 urging the court to allow the judgment of the Court of Appeal on whether the EFCC has a fiat to prosecute this case. “I urge the court to dismiss the application of the defence and call the defendant to take his plea,” he said.

Justice Oyefeso adjourned the case to March 30 for ruling.

Counsel from Ministry of Justice Can’t Defend an Accused Person

Violence Against Women in Nigeria is on the Rise – FIDA