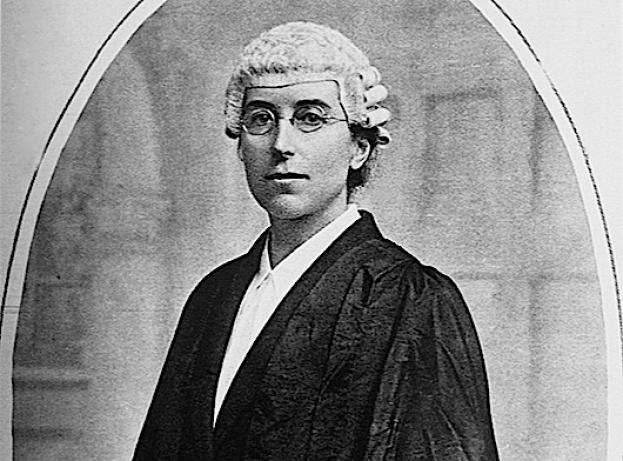 Ivy Williams, a member of the Inner Temple, was the first woman to be called to the English Bar. She was born in Newton Abbot in Devon on 7 September 1877; her father, George St Swithin Williams, was a solicitor. Ivy was educated privately alongside her brother, Winter: she studied Latin, Greek, Italian and Russian, travelled in Europe, and spoke French and German fluently. At the age of nineteen, she joined the Society of Oxford Home Students (now St Anne’s College, a women-only college until 1979) as the third female law student at Oxford. She took a second class in her BA Jurisprudence examinations in 1900 and in her BCL examinations in 1902; however, Oxford did not at this stage allow women to matriculate or be awarded degrees. She was eventually granted her BA, MA and BCL on 14 October 1920, a week after matriculating. In 1903 she received an LLD from London University.

In December 1919 the Sex Disqualification (Removal) Act 1919 came into force, removing the restriction on women being admitted to the Inns of Court. Sponsored by Sir John Simon, Williams joined the Inner Temple as a student member on 26 January 1920 (only a month after the first woman became a member of one of the Inns: Helena Normanton, who joined the Middle Temple on Christmas Eve 1919).

She received a certificate of honour (first class) in her final bar examination in Michaelmas 1921, excusing her from keeping two terms’ dinners. As a result, when she was called to the English Bar on 10 May 1922, she was the first woman to reach this milestone. (Frances Kyle had been called to the Irish Bar six months earlier, on 1 November 1921.) The event was reported in the New York Times, which spoke of the “historical significance” of the event. The Treasurer, Henry Dickens (the son of Charles Dickens) directed the first half of his speech to the new barristers to Williams, describing the great advances in women’s rights while admitting that some prejudice still remained in law. Williams, who as senior student stood at the Treasurer’s right, responded to his speech by thanking the Benchers for the honour they had bestowed and asking that every support be given to the women who would follow her.

Williams described the call to the Bar as “the dream of [her] life”. Her main intention was to be able to offer free legal advice to the poor. She had hoped to join an Inn of Court for many years, reading unofficially in chambers in Lincoln’s Inn before women were admitted; in 1904 she commented that if the legal profession did not admit women, they would form a third branch and practise as outside lawyers (a statement which the Law Journal reported as a threat). When Williams was eventually called, she chose not to practise.

She was a tutor and lecturer in law to the Society of Oxford Home Students from 1920 to 1945, and was elected an honorary fellow of its successor, St Anne’s College, in 1956. As Oxford’s first and initially only female law tutor (the first woman to teach law at any English university), she also taught students at the University’s other four women-only colleges. In 1923 she endowed two law scholarships at Oxford in memory of her brother, one of which was reserved for women.

The Winter Williams Studentship in Law is currently worth £7,500 and is awarded annually to a UK, EU or international student studying for a postgraduate degree in the Faculty of Law. In the same year, Williams became the first woman to be awarded a Doctor of Civil Law degree by the University of Oxford, in respect of her publication of The Sources of Law in the Swiss Civil Code. She published The Swiss Civil Code: English Version, with Notes and Vocabulary in 1925, which received the appreciation of the Swiss federal authorities. In 1930 she was a delegate to the Conference for the Codification of International Law at The Hague.

As she grew older, Williams’ eyesight began to fail, and she taught herself to read Braille. Finding this difficult, she decided to systematise her learning, initially writing a booklet and then a Braille primer; it was published by the National Institute for the Blind. She taught pupils to read and write Braille, by correspondence, almost to the end of her life. After her death, on 18 February 1966, her obituary said of her that “Of no one could it be more truly said that ‘she turned her necessity to glorious gain’, using in old age for the service of others the powers and enthusiasm which had won her distinction in her youth”.

Justice Musa Danladi Sworn In as the New Chief Judge of...