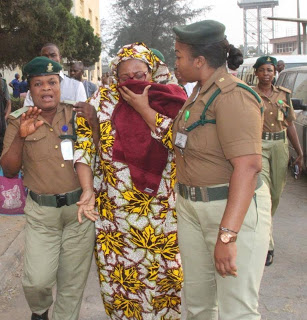 Justice Lateefa Okunnu of Lagos High Court in Ikeja has sentenced Ada Ugo-Ngali, the Managing Director of Ontario Oil and Gas Limited and her co-defendant Walter Wagbatsoma, the Chairman of the company, to 10 years in prison for fuel subsidy fraud.

The judge gave the judgment today, adding that the sentence would begin to count from January 13th, 2016.

In addition to the jail sentence, Ugo-Ngadi was ordered to refund N754 million being the amount she defrauded the Nigerian government. Justice Okunnu while reading the judgment noted that the convicts defrauded the Federal Government of Nigeria N754million in oil subsidy transactions totaling N1.9billion.

Ugo-Ngadi fainted in court during her last appearance in court as the Judge was about to sentence her after finding her guilty in a N1.9billion oil subsidy fraud.

At the court today too, she appeared on a wheelchair.

The two convicts were arraigned at the Ikeja High Court on August 1st 2013, alongside Mr, Babafemi Fakuade and their company Ontario Oil and Gas Limited.

Fakuade, an official of the Petroleum Products Price and Regulatory Agency (PPPRA) was curiously acquitted of the charges.

While acquitting Fakuade, Okunnu said “The case before the third defendant is that he helped in forging the Shore Quality Certificate, what I see before me is that he only signed the document while acting in his capacity as a PPRA official.

The report has it that Mr. Wagbatsoma is currently under house arrest in the United Kingdom for money laundering. Sometimes in 2012, the defendants were first arraigned before Justice Habeeb Abiru, but Mr. Wagbatsoma was absent because he fled the country despite the court holding his international passport. He was subsequently arrested in Germany and extradited to the UK for money laundering. 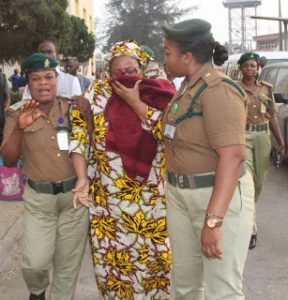 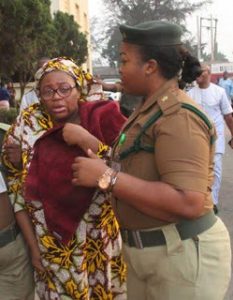 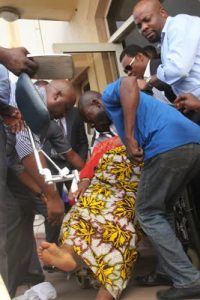