California’s notoriously difficult bar exam has long been a point of pride among the state’s lawyers. Now it is prompting blowback.

With passing rates hitting historic lows, the state’s law schools are pushing for a controversial change: lowering the score required to pass.

The educators argue that California holds graduates to an unreasonably high standard that no longer can be justified, especially as the price of law school skyrockets.

Others say lowering the bar would pander to a recent cohort of law students with weak credentials, and that law schools should either raise their own standards or shut their doors.

The issue came to a head after the announcement that just 35% of takers passed the most recent California exam, given in February. Only 43% passed last July’s test, the lowest mark for the summer exam in more than three decades.

Bar-passage rates nationally have trended downward since 2014. While some states have begun to see rebounds, others haven’t. Florida, for instance, continued a four-year downward slide on last July’s test, to 68% passing, down from a recent high of 80% in July 2012.

The declining rates have coincided with a steep drop in applicants to law school, spurring the programs to shrink class sizes and, in some cases, admit students with weaker grades and test scores. From 2010 to 2016, first-year enrollment at American Bar Association-accredited schools nationwide fell nearly 29%.

One camp of law-industry watchers blames the drop in passing rates on the declining credentials of incoming classes. Others point to changing study habits of so-called millennials, who grew up with the ability to find information at their fingertips and aren’t accustomed to the intensive memorization and writing skills needed to pass a bar exam. Law schools point to the test’s required score as the problem.

ALSO READ   Marital Assault and the Rights of a Nigerian Woman: A Concise Critique of the Penal Code 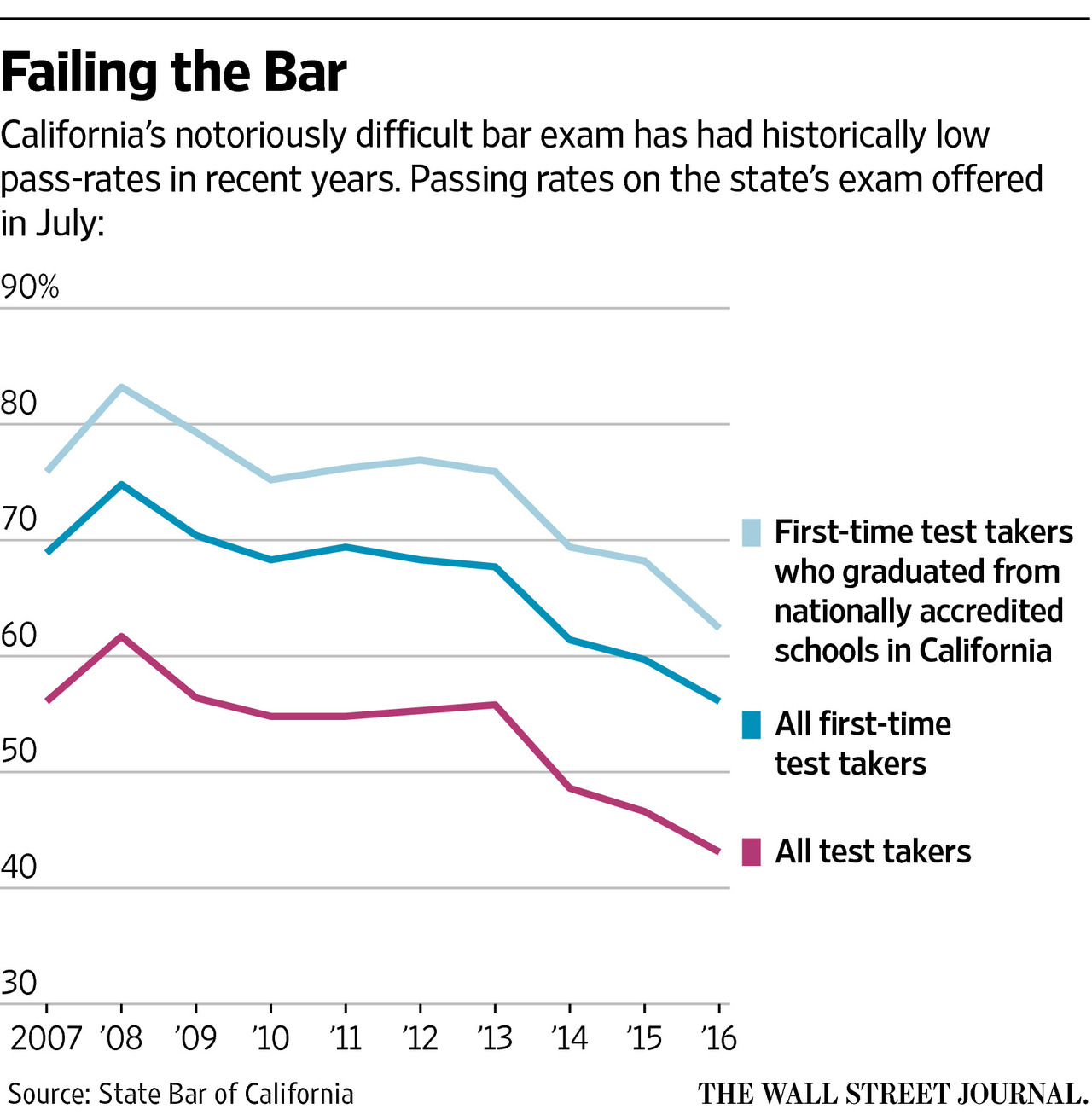 The issue has been acute in California, which licenses the second-largest number of lawyers each year after New York and houses 10% of the nation’s ABA-accredited law schools.

Deans of 20 of California’s nationally accredited law schools earlier this year unsuccessfully tried to persuade the California Supreme Court, which oversees the state bar association and regulates the exam, to temporarily lower the passing standards. The controversy soon reached the statehouse, where the Senate Judiciary Committee called a hearing to analyze the decline.

Now, the State Bar of California is racing to answer a series of existential questions: Is the stringent test—with a passing standard higher than all states but one—serving the public interest? And does the exam even test what incoming lawyers need to know?

A study released this week by two Pepperdine University School of Law professors, Robert Anderson IV and Derek Muller, concluded that California lawyers with lower bar exam scores were more likely to be disciplined or disbarred during their careers, based on limited publicly available data.

The format of the exam hasn’t changed substantially in decades, though the test will be reduced from a three-day undertaking to two days starting in July. A California state bar analysis concluded that the two-day test shouldn’t affect passage rates.

At University of California Hastings College of the Law in San Francisco, Dean David Faigman said he was shocked and disappointed last fall to learn that just 51% of his graduates taking the test for the first time passed the July exam.

While accepting that his school had to do more to help students prepare, his ire soon turned to the exam.

Each state sets its own passing score on a common multiple-choice section of the bar developed by a national organization. Since 1984, California’s so-called cut score has been 144, higher than every state but Delaware. New York uses 133; 16 other states set it at 135.

If California used the same passing score as New York on last July’s test, 87% of graduates from nationally accredited schools in the state would have passed, compared with the 62% who passed, according to an analysis commissioned by the state bar.

“Does California know something the rest of the country doesn’t?” Mr. Faigman said. “The more I dug, the worse it smelled in terms of what California was doing.”

Mr. Faigman and other deans say lowering the standard isn’t a matter of catering to students who are no longer equipped to pass. Instead, they argue there is no good reason passing the exam ever had to be so hard.

Weily Yang, a 2015 graduate of Whittier Law School in Southern California, failed the bar three times before finally passing February’s test. Whittier College announced in April it would close the law school, in part because of low bar passage rates.

Preparing for the bar multiple times taught Mr. Yang how to pass the test, he said, but “I don’t think it helped me at all at becoming a better lawyer.”

The 33-year-old has been living with his parents since graduating, and now has a job at a trusts-and-estates law firm. The time spent retaking the test, he said, “hindered my finances, it hindered my quality of life.”

Some practicing lawyers say the problem isn’t the difficulty of the test but that there are too many law schools churning out graduates with little chance of finding decent employment.

“The focus should not be on dumbing down the ability to pass the bar,” said Jeremy Rosen, a partner at California appellate firm Horvitz & Levy. Rather, Mr. Rosen said, the takeaway should be that “a lot of people shouldn’t be in law school. We have too many law students nationwide.”

The state bar is now working to complete a series of studies by the fall that will help the state Supreme Court decide what to do. Some states have moved their passing score down in past decades, though more have raised it.

“We intend to let the results of these studies guide the direction we take and the recommendations we make,” said Leah Wilson, the chief operating officer of the state bar, who added that the association is concerned about the falling passage rates.

We are not out to ridicule the bar, says EFCC