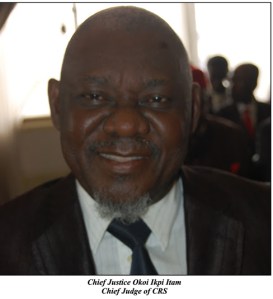 The Chief Judge of Cross River State, Justice  Okoi Ikpi Itam is dead. He died in a Calabar hospital. He was aged 66.

Itam was born on May 18, 1954 in Ugep, Yakurr Local Government Area. He attended primary school in Ugep, Community Secondary Grammar School, Ugep in 1971 and the University of Nsukka where he obtained Bachelor of law degree and was called to bar in 1977.

At one time or the other, he was Chairman Local Government Council election tribunal in 1991, Judge High Court of the State also in 1991, Chairman Public Funds and Property Recovery Tribunal, Cross River State 1992- 1997, Judge High Court of Gambia 2000, Judge Advocate for Gambia Armed Forces General Court Martial between 2001- 2004 Acting Chief Justice of Gambia 2002, Justice of the Gambia Court of Appeal 2003- 2004 and Chairman Presidential Commission of inquiry into the Administration activities of the auditor General of Gambia in 2001 among other prestigious positions.

The Director General for Due process and price intelligence Bureau Barrister Alphonsus Ogar commenting on the  attributes of the late Chief Judge said that he was reform-minded and a dedicated man who did his best to reform and refocus the Cross River Judicial system.

May his soul find rest.