The event was the 12th Annual Lecture of AELEX Law Firm held in Lagos on Wednesday, 22nd November, 2017 at the Muson Centre Onikan Lagos. The topic for the year’s lecture was ‘Schooling Without Learning’.  In their addresses, The Chairman of the Occasion Chief Mrs. Folake Solanke SAN and the guest speaker, Professor Oyewusi Ibidapo-Obe Ibidapo Obe, former Vice Chancellor of the University of Lagos lamented that the standard of education in Nigeria has continued to fall and called on stakeholders to take drastic measures to forestall national disaster. 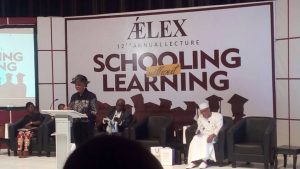 Chief Solanke SAN in her opening remarks thanked Aelex for choosing such a title at this particular time when the educational standards have fallen at its lowest ebb.

She regretted what she termed a calamity of wasted years in formal education by many without learning and linked such waste to the quality of lawyers that are produced  today. She noted that many young lawyers do not know how to address the court neither do they take the patience to be properly tutored by their principals in chamber hence the need for a compulsory 2 year appretenship/ pulpilage program to entrench learning for new wigs.

“I am appalled by the unethical conduct of some so-called lawyers who employ the use of unacceptable languages in the courtroom.

“Let it be known by all those lawyers who refer to judges as “you”, that the correct manner to address a judge is “my Lord, me Lord, your lordship or simply the court.

“Also, it must be known by lawyers who use words like: yeah, yah, or yo in court, that these are unprofessional languages which are incoherent with the ethics of the profession.

“I had read this speech at a dinner of Senior Advocates held recently in Lagos, and I think it is important I re-echo it here.

“Even in the Bible, Saint Paul in his letter to Timothy said Thus: “Till I come, give attention to reading”; this, therefore, shows that the place of learning in our everyday lives cannot be overemphasized.”

She however was of the opinion that it should be a paid program so that the new wig does not feel cheated. She emphasized that the years spent in university and at the Law school where all theory and no new wig should just dive into practice without first learning the practice of Law.

She opined that there was an increase in misconduct and the use of unprofessional language and advised that lawyers should endeavor to continue to read while sharping their advocacy skills.

She commended AELEX for their efforts in holding these annual lectures as a way of giving back to the community. 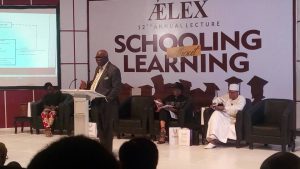 Professor Ibidapo-Obe in his paper noted that schooling is not sufficient for learning. He talked about how many Nigerian students have left the country to go and school abroad and how they top their classes. He observed that the Nigerian government should do more for the educational sector as our public schools was endangered. He was concerned that the quality of education had fallen and had thus affected leadership and expertise in different spheres of our national life. He called for government reforms and especially for the scraping of the quota systems.

In her comments Mrs. Adekoya SAN suggested that the government offer scholarships to at least 10% of the best graduating students from both state and federal institutions and recycle them as teachers with an attractive salary, this way, standards will be maintained.

She said that the reason AELEX did not focus on Legal Education is that they realized that if the foundations of primary and secondary school education were weak, legal education at the university and law school levels would not only be weak but the law student would have had a faulty learning foundation which would affect him/her throughout there career as lawyers. Thus if the educational system is not strengthened where learning is important, we cannot have good lawyers.

The lecture ended with questions and answers segment.