Home News Up Close and Personal – Date with Lady Justicia 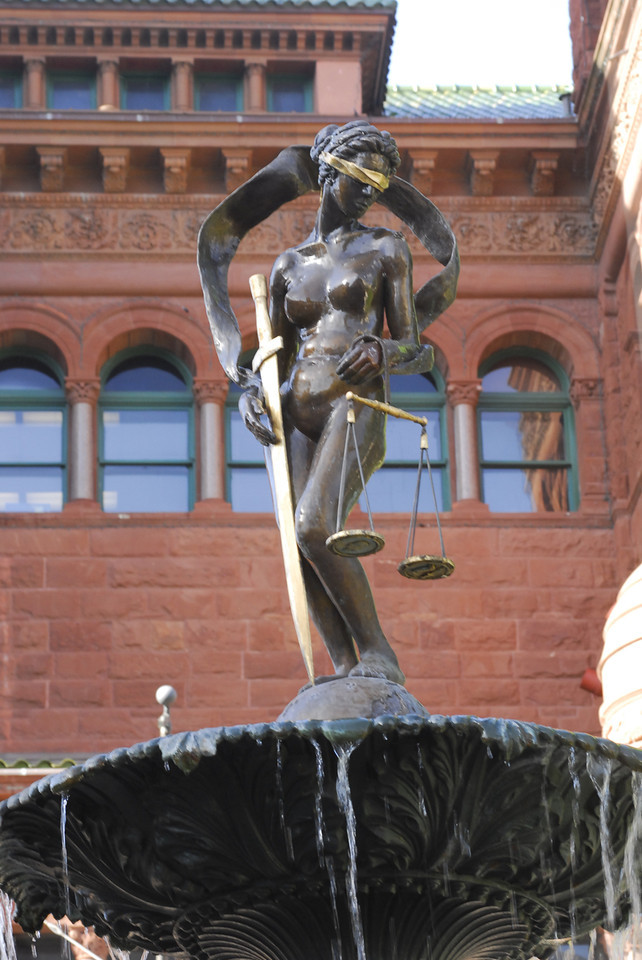 Worldwide she is a more recognizable sculpture than the Statue of Liberty. Almost every courthouse on all 7 continents exhibits her image.

She began in Greek mythology about 800 B.C. as one of the Titan gods. Each god held the power of law and Themis was goddess of ‘the order of the natural world’. That means she ordered and organized things like the seasons; i.e., winter follows summer follows spring. She also planned and ordered the path of a person’s life such as its beginning and end. Importantly she ordered and arranged what was to happen during each season for both nature and man. It followed that Caesars, Kings, aristocracy and ordinary people sought her advice and council on all the laws of nature as well as the laws of man’s concerns. There was such advice and counsel on man’s trepidations like farming, war, love, work and marriage.

Lady Justice was originally known as the goddess Themis. In Greek Themis means ‘order’. Her other interchangeable names are Justicia or Justice. She is also associated with the goddesses Astraea, Dike, Eirene, Eunomia, Fortuna, Tyche, and Ma’at.

Interestingly in a traditional male dominated ancient world she was a predominant and coveted authority of prophecy, advice and law. She is credited as being the first counselor and the first oracle at Delphi, even before Apollo. In her time she was the final decision maker on the laws of man and nature. Her popularity influenced and was mixed into other myths and gods. Around 22 A.D. she first appeared on Roman coins as the Roman goddess Justitia, ‘Justice’. She had become a blend of Greek and Roman stories. She also borrowed select traits and accessories of other goddesses such as Dike and Fortuna amongst others. Additionally every period and people has added their changes to Lady Justice even as gods and goddess had declined with the rise of Christianity.

For an artist to study there are few visual representations of Themis from ancient times before Christianity. However, Themis’ sister or half sister depending on what school you research is Aphrodite. There are numerous representations of the ancient Aphrodite in both sculpture and painting. Appropriately Themis should look similar to her (half?) sister Aphrodite as creatively expressed by the sculptors and artists of the time of her popularity.

The classical figurative portrayal of goddesses by both the Greek and Romans of ancient time through the Renaissance has been bare or barely draped which was a sign of virtue, or good or justice. The Themis/Lady Justice of sculptor Gilbert E. Barrera is created as a Greco-Roman version of the original manifestation of the earliest Aphrodite (i.e., the Knidos Aphrodite). Barreras’ version of the original virtuous bronze shape is in composition with the styles of the Greek sculptors of antiquity, (i.e., Polykleitean ‘contropasto’ and Praxitelean ‘S-Curve’). Across Europe this is a time honored composition since Hellenistic times and in San Antonio she will be one of the first of her kind for public appreciation. She is approximately 4 feet in height and weighs about 200 lbs. For accessories she was fashioned in concert with the Roman symbols of  Justicia. She has – a simple blindfold, – balance scales of a design of that day and – a common soldiers sword of the period; plus two added imaginative art symbols, the circle (or sphere) represented by the earths’ globe and lastly the curvilinear line as a wind spirited ‘ribbon’ representing the sky or heavens.

Contropasto is the counterpoise of the human figure. In 360B.C. the Greek sculptor Polykleitus mastered it. Here Barrera’s Themis has one foot (leg) with more weight or tension and one relaxed – showing shift of balance of weight; and Themis’ back and arms twist to one side of her hips and leg positions – showing naturalness of stress-free posture. In composition it creates a more vibrant yet relaxed appearance. Presented on the earths’ globe the implication here is there will be a change or adjustment of posture into motion. On a turning world she offers the appearance of preparedness to adapt her stance and weight. Additionally, fitting to the period of Themis is the sinuous S‐curve developed by the leading sculptor of that period Praxiteles. Literally it is the form of the “S” shape from the top of the figure to the bottom. That style of posture is gracefully revealed in the Themis of sculptor Barrera. Beginning at the top of the bun of her hair around her face curving back behind her shoulder then fast down her relaxed leg and again curving around the earths’ circle.

The hair style of Themis is classic Praxiteles as exhibited by his most famous Aphrodite of Knidos. It is done in a braided bun with two bands holding the hairstyle close to the head. The figure is natural without covering. For the artists composition it is intended to also be symbolic of not hiding the processes of justice. Research at this time has indicated no other Lady Justice around the world presents Themis in this striking compositional design.

The Themis of sculptor Barrera is graced with 5 key features. The blindfold, sword and scales are the classic devices. Here they are gilded in gold to accent them as the established symbols of Lady Justice. There are two artist added creations: a ribbon and the earth. Below is a short description of the main accessories.

The scales … represent that Lady Justice carefully weighs the claims of each side. They are referred as the ‘scales of justice’. Each scale presents a measure of evidence. Therein each scale or dish also has inscribed symbols. On the top side of one dish, a dove represents good claims; on the bottom side of that dish is a Gemini symbol representing the witnesses, claims of “he said, she said”; on the top side of the other scale a snake represents bad claims; on its bottom side is the symbol of a linen scroll page which represents written laws or facts; and next to the scroll symbol is a knife, to represent weapons or instruments used in the claim. The design of the scales of justice and designs on the dish scales are researched from pre-Christianity and can be found both on the ancient red vase paintings and in sculpted stone reliefs of the time Themis was in vogue.

The Sword … represents the enforcement measures of Lady Justice. It means Themis stands ready to obligate faithfulness to her decision of reason and justice by both parties. Here Barrera’s Justicia holds a sword that is oversized to her body proportion as the swords’ size symbolizes a very important facet of justice, respect. In Barrera’s composition the sword is barely held by Themis’ right hand but is very closely positioned to her body. Thus she does not reign by fisted threat or fear of use of a weapon but instead she rules and openly exhibits she is prepared to get respect. The design of the Barrera sword is period appropriate (700 to 300 B.C) to the time of Themis and is known as a hoplite sword, commonly used by the Greek citizen soldier.

The Blindfold… today probably her most famous symbol – it first appeared in the fifteenth century. The blindfold represents decisions of objectivity and/or impartial decision or decision not influenced by wealth, politics, popularity or infamy etc. Here the composition of sculptor Barrera offers the blindfold with a slight space under the eyes where it could be implied that Justice may have peeked and not been impartial. This device is merely an insight for humor to match post rulings conversations of alleged unfavorable outcomes or unhappy experiences.

The final two symbols are heaven and earth – or the sky as a ribbon and the globe of planet earth. These are artistic additions of sculptor Barrera and are multifaceted. They are intended to artistically tie the form to its environment; to tie the sculpture and fountain to San Antonio’s own family composition; and to reveal more of the marvelous family story in the mythology of the Greeks. Thus Themis is sculpted with her symbolic mother and father as a family unit. In some philosophies the sky is the mind and the earth is the body; and the systems of reason, order and laws are in between. Greek symbolism can be multifaceted and speculative.

The Earth … in art represents forms like a circle, sphere, ball or globe which are fundamental elements of art and here it is used to harmoniously base the figure to the fountain; and in Greek mythology the earth represents Gaia, (In Greek the word ‘ga’ means land or earth) (a.k.a., mother earth, or earth goddess] from which all entities were born.). Gaia is the mother of Themis. In Roman versions Gaia is known as Terra.

The Sky … the ribbon in art is a line or curvilinear form, also a basic element of art composition and here represents the heavens or the Sky. In some versions of Greek mythology Gaia (earth) gave birth to the sky known as Uranus or ‘Ouranos’. Ouranos is the mythological father of Themis and is god of the heavens, god of the sky, the sky god. The ‘Ouranos’ with an ‘O’ spelling is more often seen in the Greek usage, it is also known as Uranus. Gaia took Ouranos as her husband. They had the 8 Titans of which Themis was one of 4 daughters. The ribbon is designed to be moving or changing in the wind as the law and decisions she gives are according to the changing facts and issues.

Of family interest also are the three figures that are on the base pedestal of the cast iron fountain. They are the Seasons; the goddesses of spring, summer and winter, and are all the daughters of Themis. Their names are Eunomie, Eirene, and Dike and they were known as the Horae. They are all part of her natural order or natural laws, plans and systems to the world, i.e. she ordered the seasons and thereby also gave man his order of work, i.e., in the winter he plants, in the spring he waters his blooms, and in the summer he harvests. There was also a second set of goddesses called Horae who ruled over the hours of the day and what man did at those hours. In some versions her third generation of children were the Morai: Klotho – the spinner of life, Lacheses – the measurer of life and Atropos – the taker of life.