A Court Clerk who was yesterday suspended for dressing indecently will face more disciplinary action at the end of her suspension. 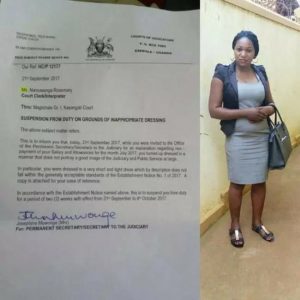 Rosemary Namuwanga, working as a court clerk and interpreter at the Kasangati Grade One Magistrates’ Court was suspended Thursday, by the Secretary to the Judiciary Josephine Muwonge, for putting on what was deemed as an inappropriate dress.

Namuwanga’s two week suspension however, Chimpreports has learnt, is not part the official disciplinaryaction, which she is likely to be subject to when she returns to work early next month.

The Judiciary’s Senior Commination’s Officer Solomon Muyita told us more disciplinaryaction, which involves officials from the Ministry of Public Service, is  probable.

“She has not yet gone through the disciplinary process. That (suspension) was just an administrative measure to make her rethink her behavior. It was just to calm her down,” Muyita said.

Ms Namuwanga troubles started when she went to the Judiciary Secretary’s office to complain about non-payment of her salary and allowances.

Her money, she said, was not reflecting on her bank account.

According to Muyita, the clerk was asked to make a written complaint, and when she did, officials investigated and found that the money had been duly paid.

“The PS therefore called her into her office to explain to her that the money had been deposited but unfortunately she came dressed the way she was dressed,” Muyita told us on Friday.

According to the suspension letter, Namuwanga was dressed in a “very short and tight dress” which did not fit in the dress code guidelines issued two months ago by the Public Service Ministry.

Muyita adds that the clerk’s situation was worsened by her conduct. He said she talked back in a harsh way at her senior officers and tried to defend her dress code.

Ministry of Public Service in July issued a notice warning public officers over dressing in a manner that does not portray good work etiquette.

Under the guidelines slept out by the Ministry’s Permanent Secretary,  Catherine Bitarakwate Musingwire, women in public offices are expected to dress in skirts that “are not above the knees”, wear “smart” blouses that are short or long sleeved, but not transparent.

Their cloths are also expected to cover knees, navel, cleavage and back and hair should be kept neat and presentable while bright coloured braids and extensions are not allowed.

Muyita says these guidelines were received at the judiciary and distributed to all staff.

“We therefore expected everyone to know them.”

Muyita also confirmed that the Namuwanga’s suspension was the first of its kind in the Judiciary.