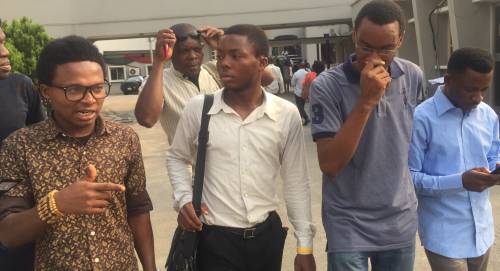 A Federal High Court in Lagos, on Friday, ordered the National Open University of Nigeria (NOUN) to pay a fine of N50, 000 to some rusticated students. The students were rusticated by NOUN last year for expressing a desire to form an association to address welfare issues and hold meetings for scholarly purposes.

Following their rustication, the students filed a suit for redress before the Federal High Court in Lagos, which fined NOUN N50,000 for “wasting the students’ time” by its delayed response to the students’ suit.

Two of the affected students, Elias Ozikpu and Abdulrazaq Oyebanji Hazmat, missed their graduation in January 2016.

NOUN  had made a preliminary objection to the students’ lawsuit but refused to file response to the suit itself since last January.

The presiding judge, Justice Olatoregun, while awarding the fine, blamed NOUN’s lawyers for the saga, which was brought about by were serial absences in court and refusal to a file response to the suit on time.

Justice Olatoregun stated that the case ought to have reached its conclusion, and the students should have “returned home in peace,” but their case suffered delays from the lawyers’ negligence.

The court however granted a motion by the defendant, which sought more time to file counter- affidavits, while also receiving the response of NOUN to the suit

Justice Olatoregun explained that there is a need to hear NOUN’s defense before judgment, even though the university had delayed its response.

The students had alleged among others, that the authorities NOUN refused to recognize any form of students’ association in the school as part of a design to extort the students as they wished. The students’ considered the refusal to have them form an association as a breach of their constitutional right.

The case was adjourned until March  9, 2017, as the students’ counsel requested for time to prepare for NOUN’s response.