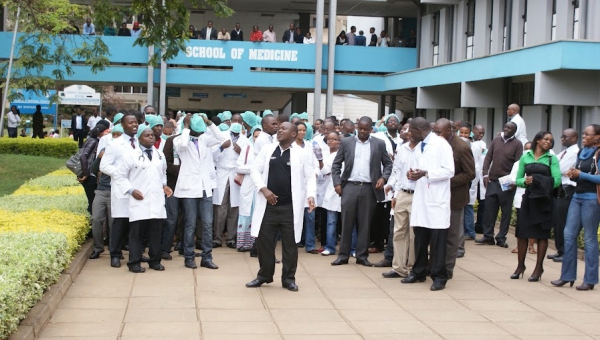 A Kenyan court has handed down a one-month suspended jail term to seven union officials over a doctors’ strike which has crippled public hospitals for the last 40 days.

However Judge Hellen Wasilwa said that if the doctors did not call off their strike within two weeks, the officials would “be arrested and taken to jail.”

The walkout by some 5,000 Kenyan doctors has devastated public health services in the East African nation, where few can afford private care which is the only option remaining to them.

The medics last week rejected a 40 percent pay rise offer from the government, demanding the full implementation of a 2013 collective bargaining agreement (CBA), which assured them of a 300 percent raise and other improved conditions.

The court in December declared the strike illegal, as negotiations following the 2013 deal had not concluded. Doctors defied the ruling and several court orders since ordering a halt to the stayaway, resulting in their sentencing for contempt of court.

The Kenya Medical Practitioners, Pharmacists and Dentists Union (KMPDU) brushed off the latest attempt by authorities to force them back to work, insisting the prospect of jail did not deter them.

“We cannot negotiate with a noose around our necks,” said union secretary general Ouma Oluga, who was one of those sentenced.

“In the month of March, we will give the best medical services to the prisons in this country,” he added.

The government had threatened to fire all the striking doctors if they had not returned to work by Wednesday.

As they failed to do so, county officials have sent out letters to doctors in their regions ordering them to explain their absence from work — the first step in the disciplinary process that could see them sacked.

Poor salaries and working conditions have already led to an exodus of Kenyan doctors to other African countries and abroad.

A Kenyan MP goes home with about three times the salary of the highest paid public doctors.

The strike has been a major embarrassment for President Uhuru Kenyatta in the run up to August elections in which he hopes to win a second term in office.

Newspaper editorials have urged the government to give the poorly paid doctors a decent wage while Kenyans on social media point to endless corruption scandals while healthcare providers struggle to make ends meet.