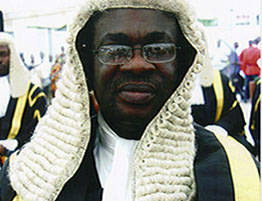 The Abuja Division of the Federal High Court, on Monday, declined to annul a portion of the Administration of Criminal Justice Act, ACJA, 2015, that requires a defendant to deposit money for bail.

The court, in a judgment that was delivered by Justice Gabriel Kolawole, dismissed the suit which was filed by an Abuja based lawyer and former Commissioner for Information in Abia State, Dr. A.C.B. Agbazuere .

He prayed the court to determine whether the provisions of section 165(2) of the ACJA 2015, which states that a court may require the deposit of sum of money or other security as the court may specify from the defendant or his surety before bail is approved, is not inconsistent with the provisions of section 36 (5) of the constitution of the Federal Republic of Nigeria ( 1999 as amended), to the effect that every person who is charged with a criminal offence shall be presumed innocent until proved guilty.

In a 17 paragraph affidavit he deposed to in support of the suit, Dr. Agbazuere argued that the provisions of the new criminal law which was passed towards the twilight of former President Goodluck Jonathan’s tenure, ran contrary to the 1999 constitution and if allowed to exist, would mean that a Nigerian citizen who has no money or other security will be deprived of his right to bail and will not have his bail approved and will therefore be sent to prison pending payment, even when such person is yet to be tried for the offence.

“That applicability of section 165(2) of the Administration of Criminal Act, 2015 will deprive Nigerian citizens of their liberty, freedom and fair hearing.

“With section 165(2) of the Administration of Criminal Justice Act 2015, the accused is to pay money before his bail can be approved when the prosecution has neither proved the essential ingredients of the case not has the accused been found guilty.

“By providing for the mandatory payment of money before bail is approved, section 165(2) of the Act has now presumed every person guilty when he has not been tried and found guilty. It is an aberration and ambush against the people and should not be allowed to stand.

“At a time when the level of poverty in Nigeria is so alarming that the President has declared that Nigeria is broke and states cannot pay salaries to workers except with the aid of bailout funds ( which are also loans), any legislation imposing payment of money on Nigerian citizens before their bail is approved is not only inconsistent with the intendment of section 36 (5) of the constitution but also a bad law as it is anti people”, he argued.

Agbazuere cited earlier judgments by both the court of Appeal and the Supreme Court to support the suit marked FHC/ABJ/CS/889/2015.

Joined as defendants in the suit were the Attorney General of the Federation and Minister of Justice, Mr. Abubakar Malami, SAN, and the National Assembly.

Meanwhile, the defendants, through two separate preliminary objections, queried competence of the suit, insisting that the plaintiff did not prove that he is an accused person before any court who has been asked to deposit money for bail.

The defendants argued that the plaintiff did to establish that his right was breached in any way, adding that depositing money for bail is a normal practice in all developed and proactive legal systems in the world.

Besides, they noted that the said portion of the law stipulated that the court “may” impose money for bail, indicating that the condition is not mandatory but only applicable in certain cases.

It was equally their argument that the plaintiff not only lacked the locus-standi to maintain the suit, but failed to disclose any reasonable cause of action.

On its part, the National Assembly argued that section 165(3) of the ACJA made provision for a refund of money deposited for bail in the event that a defendant is acquitted by the court.

The 2nd defendant said it would amount to an usurpation of its powers for the court to expunge section 165(2) of the ACJA as it was prayed to do by the plaintiff.

It argued that the court lacked the jurisdiction to grant reliefs sought by the plaintiff, maintaining that the court could only interpret acts of the legislature but lack the power to expunge any portion thereof.

Even though he dismissed the suit, Justice Kolawole however held that the plaintiff, being a citizen, had the right to challenge any law capable of undermining the supremacy of the constitution.

The court equally dismissed contention of the National Assembly that it was bereft of the powers to expunge any piece of legislation found to be in contravention of any portion of the 1999 Constitution, as amended.

Justice Kolawole held that section 165(2) of the ACJA is valid and not inconsistent with section 36 of the Constitution.