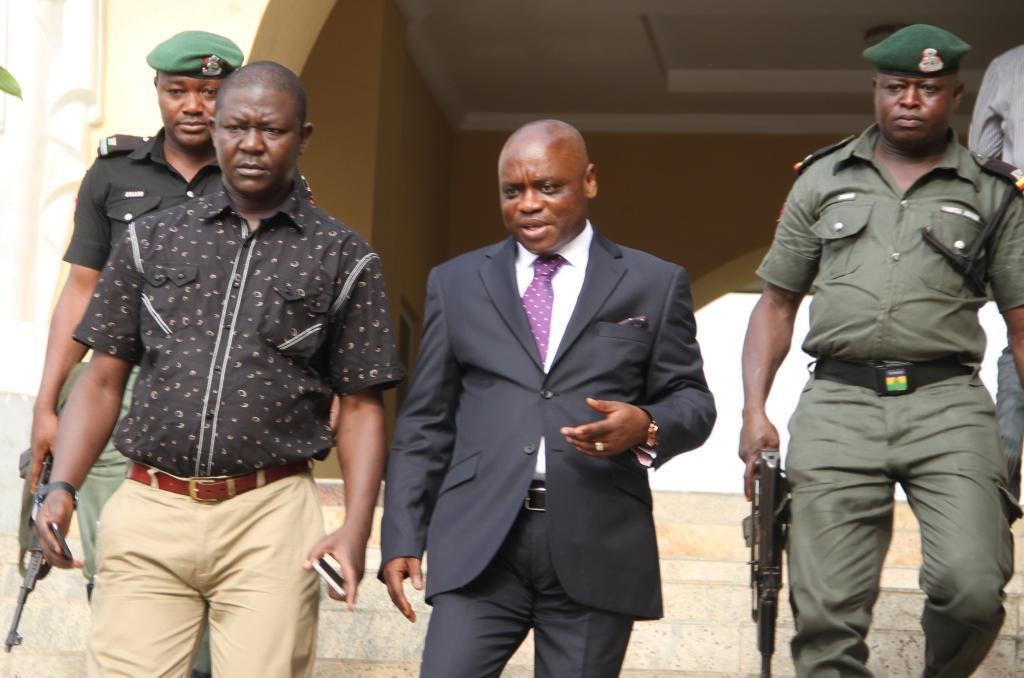 Daniel Danladi, a detective with the Special Task Force of the Economic and Financial Crimes Commission, on Thursday at an Ikeja, Lagos State, High Court revealed how judges and judicial officers, allegedly received bribes from Dr. Joseph Nwobike, a Senior Advocate of Nigeria, SAN.

Nwobike is being tried by the EFCC before Justice Raliatu Adebiyi for allegedly offering gratification to a public official and perverting the course of justice.

At the resumed hearing of the case on Thursday, Danladi, led in evidence by the EFCC lead counsel, Rotimi Oyedepo, displayed a document entitled: “Extraction Report,” on the screen in the courtroom.

In his testimony, Danladi named four judges who were allegedly involved in the gratification scam as Justice Mohammed Yinusa, Justice H. A. Ngajiwa and Justice Musa Kurya, all of the Federal High Court, Lagos and Justice James Agbadu-Fishim of the National Industrial Court, Lagos.

He said the report contained details of 14,317 text messages from Nwobike’s Samsung Galaxy Note 4 mobile phone, seized from him by the anti-graft agency during investigations in the alleged corruption case.

According to him, some of the text messages in the report contained details of bank transactions as well as messages allegedly sent by Nwobike to the judicial officers and judges.

Danladi said: “The result of the extraction report clearly showed that the defendant was conveying money to judges of the various the courts.

“He also wielded influence over which judge should hear his cases.

“This is contrary to the statement that the defendant gave to the EFCC that the only judicial officer he gave financial assistance to was Hon. Justice Yinusa.”

Danladi further gave details of judicial officers who Nwobike was allegedly in contact with.

He said: “The defendant was in regular phone contact with one Jide and Baruwa of the Federal High Court and one Helen Ogunleye, who is the registrar to Justice Musa Kurya.”

Danladi said “On Novemeber 5, 2015, the defendant sent a text message to Jide stating he wanted his matter which was Timi Akpobolokemi and others Vs the EFCC with suit number FHC/L/CS/1665/2015 to go before Hon. Justice Rita Ofili-Ajumogobia.

“He acknowledged receipt of the text message and some days later the matter was assigned to Ofili-Ajumogobia.

“In FRN Vs Dr Oluwafemi Thomas and others, he suggested that that matter should go to Hon. Justice Saidu with Jide confirming receipt of the text.

“In a matter in which EFCC was a party, the defendant sent a text to Baruwa of the Federal High Court stating that he wanted the matter to be assigned to Justice Abang’s court.

“Investigations revealed that the matter was assigned to Justice Abang as agreed between them.”

Danladi further revealed how the defendant unduly influenced matters that the anti-graft agency had at the Federal High Court in which he was counsel for the opposing party.

“He suggested that these cases as well as some others should be assigned to Justice Yinusa, our investigations revealed that they were assigned to the judge.

“On March 20, 2015, the defendant paid N750,000 into the UBA account of Hon. Justice Yinusa and a few days later a court order was granted by the judge in the defendant’s favour.

“Our investigations revealed that the defendant paid money into the First Bank Account of Hon. Justice James Agbadu-Fishim of the National Industrial Court.

“We wrote to First Bank where the judge operates three different bank account and they confirmed such payments.

“Our investigations revealed that the defendant gave Helen Ogunleye, the registrar to Justice Musa Kurya, N250,000 as well as undisclosed sums to her boss the judge.

“Investigations revealed that money was also paid to Justice H.A. Ngajiwa by the defendant through a company account owned by the judge.”

The witness proceeded to read aloud the text messages, which were allegedly exchanged between the defendant and the registrar.

He said: “The text message sent on March 25, 2014 revealed the registrar asking for financial assistance from the SAN for her brother who wanted to study medicine in Russia.

“A text message sent on December 15, 2014, the SAN told the registrar that a sum of N250,000 was for her, while some undisclosed money in an envelope was meant for her boss, Justice Musa Kurya.”

Danladi further testified and read out a text message in which Ogunleye acknowledged receipt of the money.

The witness also testified that Justice Agbadu-Fishim was invited by the EFCC and he admitted receiving the funds from the defendant.

He said: “We invited Justice James Agbadu-Fishim to our office sometime in late 2016, he made statements confirming that the defendant paid money into his account.”

Danladi told the court that Jide was also invited by the commission where he admitted exchanging text messages with the SAN.

Akanni said “This evidence does not have any relevance to this case.

“The test of admissibility is relevance and there is not a single charge before this court that relates to payment of money to judges.

“The charged relate to payment of money to specific individuals and Section 1 of the Evidence Act is very clear.

“It states that evidence has to be relevant to the fact in issue.”

Responding to Akanni, Oyedepo said: “The payment of monies to judges is the basis of our case in counts one to eight, while counts nine and 10 border on the attempt to pervert the course of justice.

In his ruling, Justice Adebiyi said: “The testimony of the witness is relevant to the case.

“The prosecution should direct the witness to incidents that occurred within the Federal High Court.”

The case was adjourned to March 28 and 31 for continuation of trial.