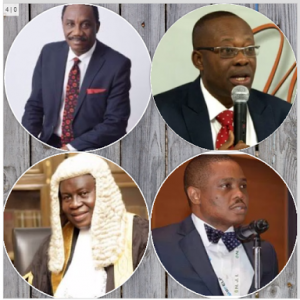 The Eastern Bar Forum(EBF) will hold its meeting from the 25th- 27th Day of June, 2017. Apart from the regular meeting of the EBF, it will also elect and swear in new executive of the EBF.

EBF is made up of all the branches of NBA in the Old Eastern Region, which include modern day, Abia, Akwa Ibom, Anambra, Bayelsa, Cross River,  Ebonyi, Enugu, Imo and Rivers states.

The quest for leadership positions within the EBF this year is important as the NBA has zoned it’s presidency to the region for the 2018 general elections.

The EBF currently boasts as the most organized and united regional forum of the NBA. This forthcoming elections would furthermore entrench the existing unity in the forum, if fairly handled, as already being expected.

Some members of the EBF I spoke with maintained that the forum will not tolerate any act that tends to threaten the continuous unity, brotherliness and cohesion within the EBF.

A member of the outgoing executive, who does not want his name on print, vehemently maintains that the unity of EBF cannot be compromised on the altar of political expedience. He further warned that any candidate, who does not have the interest of EBF at heart should not bother contesting the election.

He also stated that EBF will conduct a free, fair and just election to select its leaders in line with the constitution of the Forum. He urges all members of EBF to remain united and committed to service of EBF.

As at press time, the EBF Electoral Committee have not released the list of candidates but I am reliably informed that in line with the EBF constitution, the list would be released anytime soon, for the candidates to be able to reach out to all the financially up to date voting delegates who will be in Calabar for the meeting.

EBF is a family affair and in her election, there is no victor no vanquished but merely an affirmation of trust on those elected to honestly pilot the affairs of EBF.