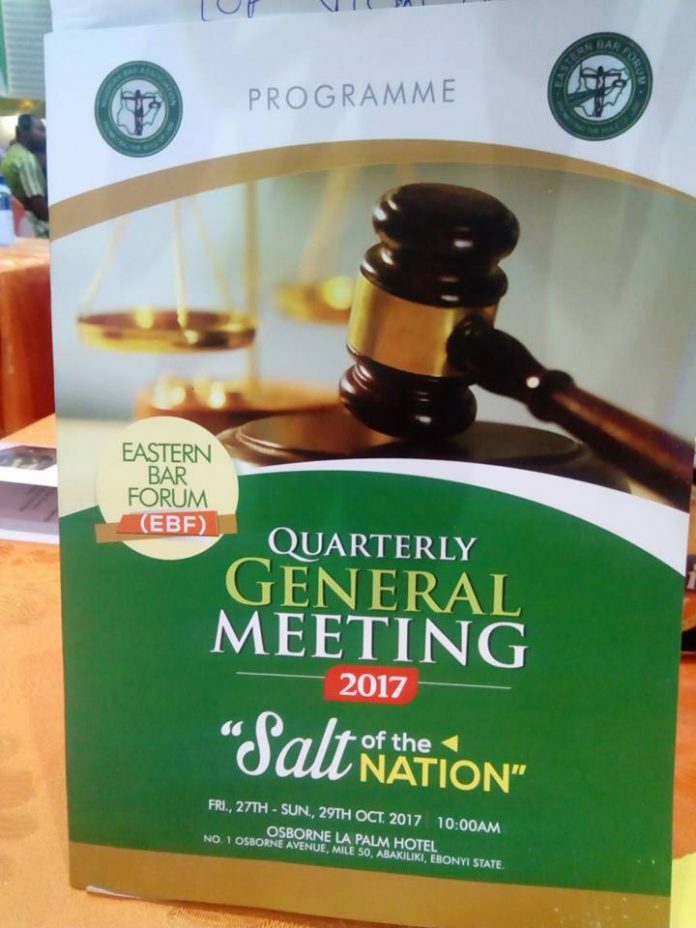 The Eastern Bar Forum (EBF), a body comprising of all the NBA branches within the 9 States of the Old Eastern Region, rose from its quarterly meeting held today, 28th day of October, 2017 at Abakaliki Ebonyi State, with a strong resolution, unanimously rejecting the proposed amendment of the 2015 Constitution of the NBA by the A.B Mahmoud SAN led administration.

A motion to this effect was moved by L. U. N. Nwakaeti (Chairman of NBA Owerri Branch) and was seconded by S. Long Williams, Esq of Portharcourt branch (Past Secretary of EBF).

According to a member who attended the meeting the rationale for rejecting the constitutional amendment was partly premised on the ground that the NBA Constitution can only be amended at the AGM and not at an Extra-Ordinary General Meeting as is being proposed by President A.B Mahmoud SAN , and also that It’s not healthy for the Bar to amend the constitution in an election year. It was further resolved that any branch of the NBA under EBF that has sent a memo concerning the amendment of the constitution to the Constitution Review Committee shall immediately write to withdraw same.

The Forum also today, in line with its existing tradition, has released official guidelines for adoption of it’s own candidates for the 2018 NBA GENERAL ELECTIONS.

By the guidelines released today and signed by the Governor of the Forum, Chief Arthur Elvis Chukwu and the Secretary, Paul Ubom, aspirants of EBF extraction shall have 21 days from today to file papers to the internal screening committee of the EBF for their possible adoption as the candidate of the Forum in the coming elections.

A screening committee was also constituted in accordance with the EBF Constitution.

Below is the adoption guidelines:

1. Every Aspirant Shall Submit The Following Letters To The Screening Committee As Notice Of Aspiration:

A. Expression of Interest Letter
B. Letter of Allegiance to Be Bound By EBF Decision
C. Letter of Good Standing from the Aspirants Local NBA Branch, Duly Signed By the Chairman and Secretary of The Branch.

2. Every Aspirant Shall Submit To The Screening Committee, Copies Of All Documents Qualifying The Aspirant For The Office Being Vied For In Accordance With The NBA Constitution.

3. For Any Aspirant To Qualify For EBF Adoption, Such Aspirant Must Have Been Duly Qualified Pursuant To Article 11(2) Of The Constitution And Shall Submit To The Screening Committee, Copies Of The EBF Receipt For The Preceding Two Years Dues.

4. Every Notice of Aspiration, With All Accompanying Qualifying Documents Shall Reach the Screening Committee On or Before 4pm of 18th Nov, 2017 (Being 21 Days from the Notice Hereof).

S. The Screening Committee Is Hereby Constituted As Proved In Article 11(7) Of The EBF Constitution.

6. Notice Of Aspiration And Accompanying Documents Shall Be Properly Sealed In An Envelope And Addressed To The Screening Committee, Through The Secretary Eastern Bar Forum

I Pay my Personal Assistants – Paul Usoro Responds to...