A French court has handed down a three-year suspended jail term to Equatorial Guinea’s Vice President Teodorin Obiang for corruption.

The 48-year-old, known for his lavish tastes, is the son of the oil-rich West African country’s president.

He was absent from the trial, where he was found guilty of embezzlement.

His assets in France will be seized, including a mansion on Avenue Foch in Paris. He also got a suspended fine of 30m euros (£27m; $35m).

In November, Swiss prosecutors seized 11 luxury cars belonging to Mr Obiang. They said he had plundered his country’s oil wealth to buy luxuries, including a private jet and Michael Jackson memorabilia.

The Paris judge found that the president’s son had used his position as agriculture and forestry minister to siphon off payments from timber firms who were exporting from Equatorial Guinea. 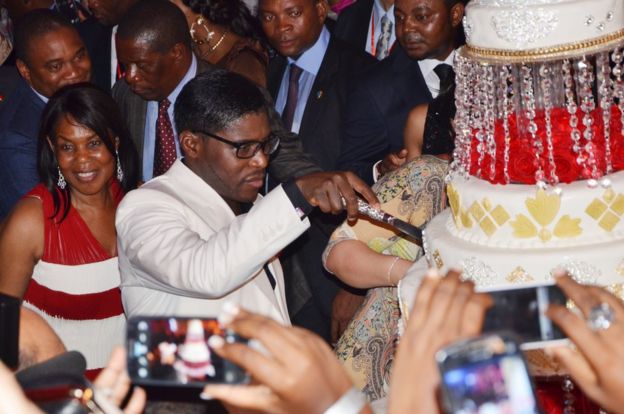 The case against him was triggered by anti-corruption campaign group Transparency International and a similar NGO, called Sherpa.

Mr Obiang denied the charges, saying his wealth had come from legitimate sources. His lawyers accused France of “meddling in the affairs of a sovereign state”, AFP news agency reported.

In 2000-2011 Mr Obiang acquired a collection of luxury assets and properties in France, including the €25m Avenue Foch mansion. He also boasted 18 luxury cars in France, artworks, jewellery and expensive designer fashions, the court found.

It is the first of three French investigations into the alleged “ill-gotten gains” of long-standing African leaders and their families.

The French daily Le Monde reports that the family of Gabon President Ali Bongo has 39 French luxury properties, while 24 are owned by the family of Congo-Brazzaville’s President Denis Sassou-Nguesso. They also have about 200 bank accounts, French police say.