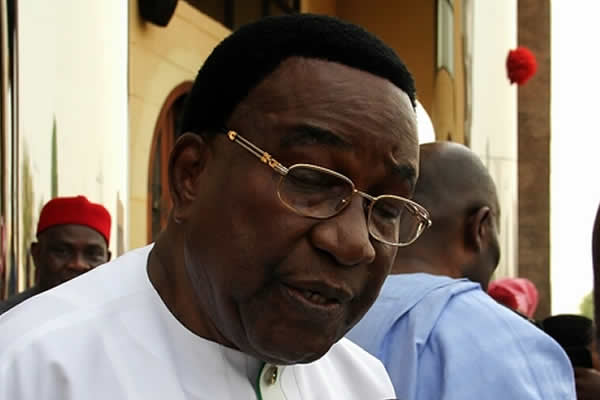 A former governor of old Anambra State, Sen. (Dr) Jim Nwobodo, has dragged the Enugu Electricity Distribution Company (EEDC) to court over his property they occupy as tenants at will.

Dr. Nwobodo instructed his lawyers in Enugu to eject forthwith the electric distribution firm which had been his tenant for over sixteen years now.

Our source in Enugu said that the company approached Sen. Nwobodo to allow them keep their substation which supplies power to parts of Akwuke and Gariki in the year 2000; a request which senator Nwobodo obliged without ado.

Sometime in 2006, Sen. Nwobodo wrote a letter to the Power Holding Company as they then was to come for review of their continued stay in his premises but according to the source, the company replied the letter claiming that Sen. Nwobodo had alienated the parcel of land measuring 50 by 50 meters to them yet they cannot boast of irrevocable power of Attorney, Deed of Assignment, Deed of Gift or any legal document evidencing that the senator had indeed alienated that parcel of land to the company.

The source said that some time Sen. Jim Nwobodo instructed his lawyer Chijioke Okibe Esq to write and invite The Enugu Electricity Distribution Company who acquired the assets and liabilities of the said power Holdings Plc to come for a meeting to review their continued occupation of that parcel of land within satellite premises Gariki Awkunanaw.

After two series of meeting with EEDC legal team, they promised to intimate the management of the company about the conditions counsel to Dr. Nwobodo gave them. Up to the time the company was dragged to court to surrender possession, the company had neither made any moves to settle their stay in the premises with neither the counsel to Dr Nwobodo nor Nwobodo himself rather EEDC started the blackmail of the senator by denying him electricity for several months.

His power supply was only restored when the senator raised alarm that Emeka Offor and Ken Nnamani allegedly masterminded the plan to deny him supply so that senator Nwobodo may be cajoled into dropping the legal issues in the matter.