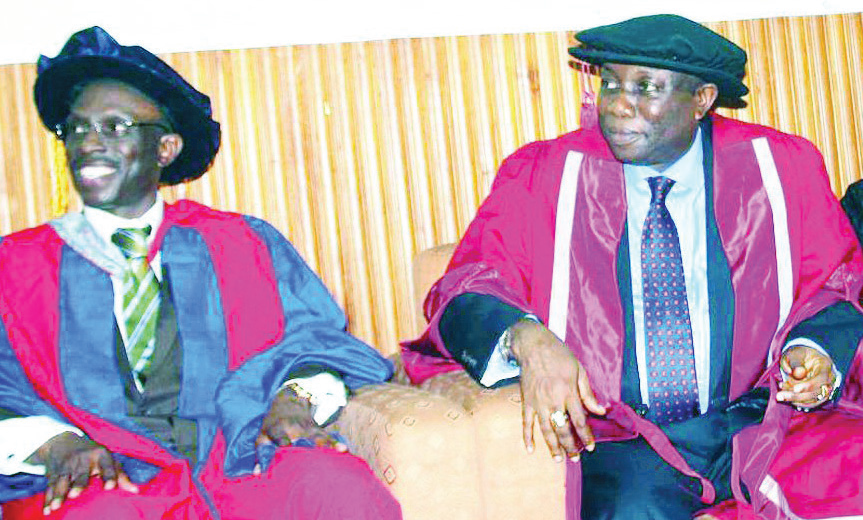 Friends and former students of the Faculty of Law at Nasarawa State University converged on Abuja recently to honour Prof. Epiphany Azinge (SAN).

Having drank from Prof. Epiphany Azinge (SAN)’s, rich fountain of knowl­edge, his former protégés and friends came together to wish him well for allowing them to tap from his deep knowledge of the law.

It was the maiden Annual Birthday Lecture Series in honour of Azinge who turned 61 recently. Surrounded by friends and well-wishers, the celebrant said he was not comfortable with the usual classy birthday celebrations that had come to define status symbol in the country.

Giving reasons why Azinge ac­ceded to the request by his friends and former students to organise the event in his honour, he said: “For me, it will be a pretty birth­day present if at the end of this event; people are able to go away with something. It means that it is a far cry from the usual entertain­ment and grandiose and opulence demonstrated because somebody is celebrating a birthday. “So, we are adding value and quality to birthday celebrations. That obvi­ously is what I thought we can take away from this event.

“I have grown up even in my marital life travelling out of sta­tion when my birthday is about two days’ time; and I would only await my wife to call me whenever I may be to say, ‘happy birthday’, but growing older I have seen the essence and meaning of becom­ing closer to where we are going. So, we will now start reconstruct­ing our lives and trying to give meaning to our lives.

“In essence, it is a beautiful op­portunity to review and rebuild our legacies in whatever that may be. If tomorrow I am no longer around and I remember that the Speaker of Kwara State House of Assembly and the Vice Chancel­lor of Lagos State University both had to fly to Abuja to honour us, I think I can go home and sleep well,” Azinge said.

Earlier, the Chairman of the oc­casion Augustine Alegeh (SAN) who is the immediate past Presi­dent of the Nigerian Bar Associa­tion (NBA), described Azinge as a “wonderful” person.

He noted that the celebrant’s intellectual and managerial ca­pacity is unequal, saying, “Az­inge is a wonderful person and an outstanding academic of interna­tional repute.”

Speaking on the topic, “The Legislature in an Emerging De­mocracy: Challenges and Pros­pects”, the Speaker of the Kwara State House of Assembly, Dr. Ali Ahmed, who was the first speaker at the occasion, said most of the States Houses of Assembly had compromised their legislative du­ties of oversight function by be­coming appendages to the Execu­tive arm of government.

He explained that most of the state governors in the country had emasculated the legislative arm of government; with the masses been at the receiving end.

The speaker equally averred that both the Judiciary and the Executive arms of government often “conspire” against the Leg­islature through granting of in­junctions by the former with the intent to stifle the constitutional roles of the lawmakers, thereby subjecting the Legislature to pub­lic opprobrium.

“In Nigeria, the legislature, for the right and wrong reasons, is gleefully subjected to ridicule and condemnation on a daily basis, to the delight and amusement of the executive arm. For the wrong reasons because the public is less familiar with, and appears unin­terested in, the legislative process and functioning. For the right reasons because some but not all legislators truly earn the oppro­brium visited on them.

“The difference is that while some members of the executive are isolated for condemnation and insult when they misbehave, the misdemeanour of a single legislator is always visited on the entire federal legislature which comprises of 474 very different and diverse individuals.

“In this Essay, we are set to evoke our thoughts on an arm of government that is vilified by the public, merely tolerated by the executive, often critiqued by the judicature but yet very important to the very operation and survival of democracy. At the end, a sin­gle recommendation, signifying a birthday gift, will be put forward.

“To sum up the thoughts ex­pressed above, one cannot but offer a word of practical advice to move our democracy forward one more step.

“It is here recommended that for separation of powers and its positive effects on good gover­nance to take root in Nigeria, the practice of neutralising pow­ers of the legislature must stop. But because there are more than enough Supreme Court decisions supporting, undemocratically, neutralisation of the power of the legislature.

“We must devise a way of pre­venting this neutralisation from continuing. “And this is the only one recommendation that one will offer at the end of this lecture.

The only way is to recommend a legislation to the effect that no in­terim orders from a court shall be issued to prevent any legislature from exercising its constitutional powers. “To many Nigerian law­yers, this suggestion is a sacrilege.

But so was the disapproval of Nigerians to the attempt to re-legislate chamber-based immu­nity that was ultimately contained in the amended draft constitution during the 7th Legislature. But to lawyers and democrats in devel­oped nations around the world, this recommended legislation to ban interim orders against the legislature that is the democratic norm. Indeed as one is not cer­tain that when passed, the courts would still not strike down such law as being unconstitutional.

Therefore, the full proof is to appeal to Nigerians and insert such pro-democracy legislation in the ongoing exercise of consti­tutional amendment. And that is our recommendation,” Ali sub­mitted.

When it was the turn of the sec­ond Speaker, Prof. Lanre Fagbo­hun who is the Vice Chancellor of the Lagos State University, he did not mince words in disagree­ing with the position of the Kwara State House of Assembly Speaker that the Legislature is the most “vilified arm” of government in the country.

The Vice Chancellor opined that Nigerians would continue to criticize and blame the lawmakers for the country’s numerous woes because the Legislature had abdi­cated its constitutional powers of oversight functions in pursuit of personal aggrandizement through “self-serving legislations”.

Prof. Fagbohun noted that life transforming bills such as the Pe­troleum Industry Bill and many others which would have added value to the lives of the people were abandoned in the National Assembly, while the federal law­makers went about with the “ob­noxious” amendment of the Code of Conduct Bureau Act with a view to stifling government’s an­ti-corruption efforts, which the current Senate President, Bukola Saraki is being prosecuted.

Speaking on the topic: “Com­plexity of Facts, Technicalities of Law: The Conundrum of Leader­ship in Nigeria,”Fagbohun said Nigeria’s developmental efforts would not achieve any goal if the country was not restructured.

“If we do not restructure our justice system and the entire gov­ernance structure of Nigeria, it will be very difficult for us to get our leaders to be able to perform their functions. Some of our lead­ers are very desirous of doing their work, but the structure that we have is not helping matters.

“What I am now advocating is that if we want the people to have a trust in the system, and we want the institutions to be able to work, then we need to strengthen public interest litigation. Let people be able to call the judiciary to order by suing them, let people be able to call the legislature to order by seeking remedies to correct ills in the society. It is when people are able to do this that the system will start doing well, because when you don’t know who is watching you, but you realize that every­body is watching you, you will be on your toes,” Fagbohun noted.