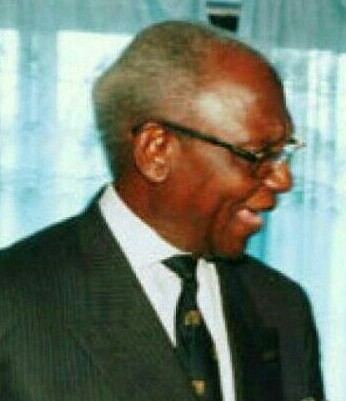 Chief Godwin Olusegun kolawole Ajayi SAN (May 29, 1931 –March 31 2014) popularly known as Chief GOK Ajayi SAN began his journey to stardom at Ijebu- Ode Nursery School (1936-37) and left for  St Saviours School, Lagos (1938- 1940). He thereafter proceeded to the popular CMS Grammar School, Lagos (1941- 1948). He later travelled to the United Kingdom where he attended the London School of Economics and Political Science. He was called to the English Bar in 1955 and to the Nigerian Bar on November 29, 1957.

Famously known and called by his initials “GOK,” he had a tremendously successful legal practice about six decades. Ajayi was among the second set of lawyers elevated to the prestigious rank of Senior Advocate of Nigeria in 1978, 21 years after he was called to the Nigerian Bar

Six years after his call to the GOK Ajayi SAN became a part time lecturer at the Nigerian Law School, till 1971.  From around the middle of the 1960s, GOK Ajayi SAN started earning fame as a legal luminary and his reputation waxed stronger in the following 40 years.

As a progressive and competent lawyer, he appeared as one of the leading legal warrior in the Second Republic for the Unity Party of Nigeria, UPN led by late Chief Obafemi Awolowo. He was the lead counsel in the famous 12 2/3 case-Awolowo vs Shagari (presidential election dispute) in 1979 and was lead counsel in the equally famous 1983 political cases like Adekunle Ajasin vs Omoboriowo (Ondo State Gubernatorial Election Dispute), Bola Ige vs Victor Olunloyo (Oyo State Gubernatorial Election Dispute). In 1981, he successfully handled the landmark case of AbduRahman Shugaba vs Minister of Internal Affairs. This was a curious case in which Shugaba, the minority leader in the Borno State House of Assembly, was suddenly arrested and deported to Republic of Chad by the National Party Nigeria, NPN-controlled Federal Government on the grounds that the politician was not a Nigerian citizen.

Chief GOK Ajayi SAN defended the late human rights lawyer, Chief Gani Fawehinmi, SAN, at the peak of his troubles in 1989 with the military government. He was there for Fawehinmi before the Transition to Civil Rule and Miscellaneous Tribunal headed by the late Justice Anyaegbunam. G.O.K. led dozens of other famous lawyers including Mr. Alao Aka-Bashorun, Chief F.O. Akinrele SAN, Dr. Olu Onagoruwa, Chief Mike Ozekhome and Mr. Femi Falana to defend Fawehinmi.

He was also available to defend retired General Zamani Lekwot and his people of Atyap community of Kaduna State who were charged with murder before a Special Military Tribunal headed by Justice Okadigbo over the Zango Kataf disturbances in 1990. His fearless and brilliant advocacy led to the discharge and acquittal of the embattled Lekwot and his kinsmen. Thereafter a grateful Atyap Community unanimously and joyously conferred the honourary title “ACHOK ATYAP” on GOK ‘Achok Atyap’ means “The Guardian of Atyap.”

In 1993, Chief GOK Ajayi SAN was on hand to lead a battery of seasoned lawyers to defend business mogul turned politician, Chief Moshood Kashimawo Abiola against the charge of treason preferred against him by the General Sani Abacha regime for demanding the actualisation of his mandate to rule Nigeria as president after presumably winning the June 12, 1993 Presidential election which was annulled by General Ibrahim Babangida’s regime.

Chief GOK Ajayi SAN left his large footprints on the sands of time trotting the legal and political landscape like a colossus.  He died on March 31, 2014 at the intensive care unit of Reddington Hospital, Lagos State. Justice Okeke of the FCT High Court Passes On at 64