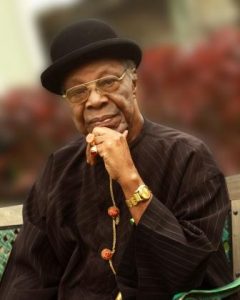 Hon. Justice Chukwudifu Akunne Oputa, CFR, JSC (Also known as Socrates of the Supreme Court) (September 22, 1924- May 11, 2014) was born into a polygamous family at a time that a man’s wealth was measured by the number of wives in his harem. His father, Chief Oputa Uzukwu had ten wives, and Chukwudifu Oputa was the last of his children. Pa Oputa Uzukwu passed on when Chukwudifu was only three months old. His mother died when he was barely six months old.

After that sad episode of his life, Oputa was brought up by his grandmother, Nee Ogonim Enesha, a trader with the then Royal Niger Company. He had his early education at Sacred Hearts school, Oguta from 1930-1936 and later on at the famous Christ the King College (CKC) Onitsha from 1937-1940. He went to Yaba Higher College, but due to the exigencies of World War (II), he was sent along with others to the then Achimota College, Ghana, then Gold Coast, where he bagged a degree in Economics in 1945. He later proceeded to the University of London where he graduated with a Bachelor of Arts in History. Then he moved on to study Law in England and by June, 1953, he was conferred with an LL.B Hons. Degree.. He was called to the English Bar-Garys Inn London on the 26th of Nov. 1953.

Chukwudifu Oputa set up a private legal service. His practising years, had him handle high profile cases such as the controversial Oguta Chieftaincy Title dispute in 1958/1959, the Amayenabo dispute of 1960 to mention but a few.

Justice Oputa served the country diligently in many capacities even before the attainment of independence. He was a member of the University of Nigeria Governing Council between 1959 and 1966; counsel Harcourt Inquiry 1959; Counsel Oguta Chieftaincy dispute; Counsel, Nembe chieftancy dispute; Counsel, Obudu chieftaincy dispute in 1960; Chancellor, Imo State University and was member, former Eastern Nigerian Marketing Board between 1958 and 1965. He was Principal, National College, Buguma between 1945 and 1948 and was Administrative Officer, Nigerian Secretariat between 1949 and 1951. Justice Oputa was appointed Chairman, Commission of Inquiry into Structure of Customary Courts in former Eastern Nigeria in 1967; Chairman, Commission of Inquiry into Abakaliki Nkpuma Akpatakpa Disturbance in 1973.

In 1966, Justice Oputa was appointed a judge of the then High Court of Eastern Nigeria in a dramatic circumstance from where he moved on to become the first Chief Judge of the Imo State High Court a decade later. In 1984, the great elevation came – the exalted position of Honorable Justice of the Supreme Court of Nigeria. It did not take long before Justice Oputa put his stamp on the Supreme Court as a man profoundly moved by classical literature, history, divinity and philosophy and whose judgments possessed the temerity that is in the preserve of genius

Justice Oputa was appointed to investigate abuses that took place in the country during the 15 years of military rule, which ended when President Obasanjo took office as elected president on May 29, 1999. The Oputa Panel was required to examine human rights abuses from 1976 to 1979. The quest followed demands for a thorough investigation of rights abuses in Nigeria since independence in 1960. He was also a delegate representing Imo State at the National political Reform Conference in 2005.

The judicial career of Justice Chukwudifu Oputa spanned 26 years through four regions, states and territories until his retirement from the Supreme Court in 1989 at the age of 65. At Oputa’s valediction, the then Chief Justice, Mohammed Bello, himself an outstanding judicial figure, described him as “the Socrates of the Supreme Court”.

Justice Oputa has published over 40 papers in lectures, conferences and seminars. In appreciation of his meritous service to his fatherland, he was conferred with the National honour, commander of Federal Republic (CFR) by the federal government.