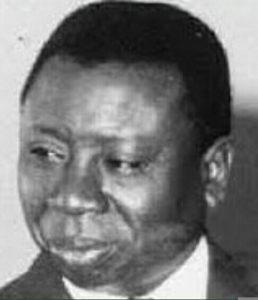 Sir Egbert Udo Udoma (21 June 1917 – 2 February 1998) was born in Ete, Ikot Abasi, a town on the right bank of the Ikot Abasi River in the Ibibio area of Akwa Ibom State. His father was Udoma Inam Abasi Ayanti, a produce trader and vice president of the area native court while his mother was Adiaha Ayanti. His mother was killed during the tax crisis of 1929 on the orders of the District Officer of Ikot Abasi. Then, she led a group of women to negotiate over tax matters as a crisis was engulfing the area and had already caused havoc n Aba, Etim Ekpo, Ukam and Essene. When the women reached the D.O. offices, perturbed by the fierce demonstration, the D.O cowardly ordered the West African militia to shoot at the women.

Sir Udoma started education at a Wesleyan Methodist Mission school at Ibekwe and later attended Methodist College, Uzuakoli. After completing his secondary education, he worked for G.B. Ollivant in Ikot Abasi and the Public Works Dept and the Nigerian Customs both at Port Harcourt. It was while in Port Harcourt that he became aware and joined the Ibibio union. He later proceeded abroad to study at Trinity College, Dublin with the support and scholarship from his community, the Ibibio Union, an organization which he later led. At TCD, he served as President of the University Philosophical Society, the student debating society and later wrote a treatise against colonialism and indirect rule. He later earned a post graduate degree at Oxford University. While in England, he joined the Labour Party and the Fabian Society. The scholarly Udo Udoma can be said to be the first black man on record to earn a doctorate degree in law from Oxford University in 1944.

He returned to Nigeria to practice law in the mid 1940’s, but became intrigued and moved by the nationalistic politics of the time. At the time, Nigeria was attracting returning emigrants who had left previously. He joined the National Council of Nigeria and the Cameroons early on and with the urging of colleagues in the Ibibio State Union and his constituency, he contested and won a seat to the Eastern House of Assembly in 1951 as an independent before subsequently joining the NCNC. However, he followed a number of legislators from the NCNC Calabar province in resigning from the party following a crisis. From 1953 to 1959, he was a member of the federal House of Representatives, under the platform of the United National Independence Party, he was a leading proponent for the creation of a Calabar/Ogoja/Rivers state. However, his failure to succeed in the creation of an independent region or state in south eastern Nigeria and the triumph of the three major regions at a constitutional conference in 1958 led Egbert Udoma to concede politics to the dominant parties. Udo Udoma served as an acting Governor General of Uganda before being appointed the country’s Chief Justice from 1963 to 1969.

Sir Udoma started law practice in Aba in 1946 and handled appeal cases at the West African Court of Apeal. In the early 60s, after leaving politics, he spent a few years as a high court judge in Lagos before he was appointed Chief Justice in Uganda. On his return from Uganda, he became a justice of the Nigerian Supreme Court. As a high court and Supreme Court judge, Udoma was involved in some popular cases such as Obafemi Awolowo vs Usman Sarki in which he ruled in favor of Sarki, the minister of Internal Affairs, Rabiu Nafiu v Kano State and Lakanmi v Western State. He served as a justice of the Supreme Court of Nigeria for 13 years.

In 1947, Udoma became the president of the Ibibio State Union. While in Port Harcourt in the mid 1930s, he had served as a secretary of the Port Harcourt branch and was sponsored on a scholarship by the union to study abroad. On returning from abroad, he had been a member of a delegation to see through the speedy accreditation of the Ibibio State College. During his 14 year reign as president, he saw through the activities of the so-called man leopard, debt owned by the union to native authorities and restructuring of the union’s organization.

He also belonged to the group that championed Nigerian independence from Britain and was one of the founding fathers of Nigeria. He was a devoted Methodist and a holder of Knight of John Wesley (KJW). He died at the age of 80 on 2 February 1998.