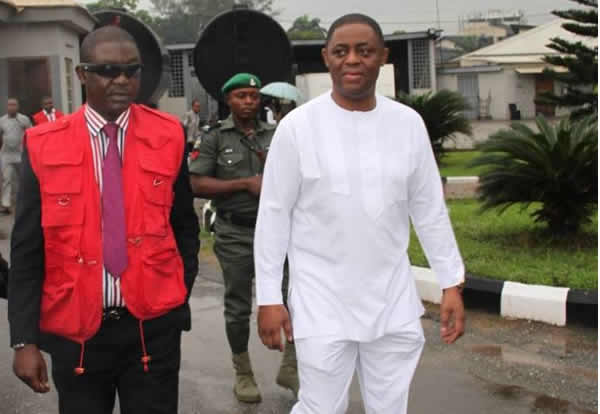 Defence counsel on Tuesday declined cross examination of a prosecution witness in the ongoing trial of Femi Fani-Kayode facing charges of money laundering before a Federal High Court, Lagos.

The Economic and Financial Crimes Commission had arraigned Fani-Kayode and a former Minister of State for Finance, Nenadi Usman, on a 17-count charge of laundering N4.6 billion.

Also charged is a company, Jointrust Dimentions Nigeria Ltd., which is said to belong to Danjuma.

They had all pleaded not guilty to the 17-count charge bordering on conspiracy, unlawful retention of crime proceeds and money laundering.

At the resumed hearing of the case on Tuesday, the prosecutor, Mr Rotimi Oyedepo, concluded his examination in chief for the first prosecution witness Idowu Olusegun is a media consultant, under the name and style of Paste Posters Company Ltd.

Olusegun began his testimony on Oct. 21, 2016, and had informed the court how sums of monies were paid to him in cash for the printing of posters and flyers by the office of the Director of the PDP Campaign Organisation.

Invited into the witness box on Tuesday, the witness informed the court that receipts were issued for monies paid to him for printing jobs.

The prosecutor then requested for exhibit P4 and P5 (cash receipts) from the court and gave same to the witness, and requested to know how much was paid to him by the office of the Director, PDP Campaign Organisation.

The witness told the court that he received payments in the sum six million naira and and N24 million, adding that all payments were made in physical cash to him.

After his testimony, Oyedepo told the court that he was done with his questions for Olusegun.

The court then asked if there were cross examinations for the witness.

At this point, counsel to the second accused, Mr Abiodun Owonikoko (SAN), told the court that in light of pending applications before the court which mainly were jurisdictional in nature, the provisions of Section 295 of the Constitution ought to be considered.

According to him, the stage is ripe to request for hearing of his pending application dated Nov. 11, 2016, seeking severance of the criminal charge of the accused.

Owonikoko said that this was brought pursuant to the provisions of sections 45 (1), and 49 (1) of the Federal High Court Act, as well as the provisions of Sections 209 of the Administration of Criminal Justice Act.

He said he was concerned with the joint trial of the first and second accused as well as the choice of Lagos as venue in a matter which he said had nothing to do with Lagos.

He argued that since the court had acknowledged the existence of pending applications, it would amount to an “anticipatory” refusal by the court, of the application of the second defendant.

Owonikoko also said that this was particularly so because he had made a clear case that fair hearing could not be achieved in a joint trial between the first and second accused.

ALSO READ   LSJSC Calls for Expression of Interest in Re: Appointment of Judges in Lagos

He noted that it was so tedious for his client to come from Abuja to Lagos on every adjourned date and spend not less than three days in Lagos, especially with all accounts frozen.

Citing the authority of Bamaiyi vs State, he stressed the need to hear his application to severe the trial of the defendants, adding that where same is refused, then it will become a proper subject for reference to the appellate court.

He, therefore, urged the court to adjourn the case for hearing and determination of pending applications.

On his part, counsel to the first accused, Mr Norrisson Quakers (SAN), aligned himself with the submissions of Owonikoko, and urged the court to first hear applications touching on jurisdiction before proceeding.

According to Quakers, my own application is even weightier as it challenges the jurisdiction of the court, and the law is trite that once such issues are raised, it must be determined one way or the other.

He argued that owing to the nature of his application, he could not commence cross examination of the witness until the legal issues raised were determined.

Quakers said that to cross examine the witness would mean submitting to jurisdiction which from all indication was in issue; he urged that a date be issued for hearing of all pending applications.

Counsel to the third accused, Mr S.I Ameh (SAN), also aligned himself with the submissions of his brothers silk.

In response, the prosecutor objected to the prayers of defence counsel, stressing that he was taken aback.

He argued that all applications could be taken together and the court afterwards defers its ruling.

Oyedepo also argued that the accused had submitted to the jurisdiction of the court having pleaded to the charges.

He said it was a clear case of volenti non fit injuria (voluntary assumption of risk), and urged the court to make progress.

After listening to counsel, Justice Muslim Hassan, adjourned the case till Jan. 18 for ruling.

In the charge, the accused were alleged to have committed the offences between January and March 2015.

In counts one to seven, they were alleged to have unlawfully retained over N3.8 billion which they reasonably ought to have known formed part of the proceeds of an unlawful act of stealing and corruption.

In counts eight to 14, the accused were alleged to have unlawfully used over N970 million which they reasonably ought to have known formed part of an unlawful act of corruption.

Meanwhile in counts 15 to17 Fani-Kayode and one Olubode Oke who is said to be at large, were alleged to have made cash payments of about N30 million in excess of the amount allowed by law without going through a financial institution.

Besides, Fani-Kayode was alleged to have made payments to Paste Poster Co (PPC) of No 125 Lewis St., Lagos, in excess of amounts allowed by law.