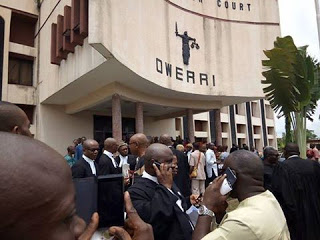 A Federal High Court sitting in Owerri has ordered the arrest of five Imo State Government officials for contempt of court.

Justice Lewis Alagoa, presiding over the civil suit number FHC/OW/133/2016 filed by a former Interior Minister, Capt. Emmanuel Iheancho, against Imo Government, gave the order on Monday due to the absence of all the defendants in court.

Alagoa ordered the Inspector-General of Police and his men to arrest the officials wherever they were sighted across the country.

Counsel to the Defendants, Mrs J. C. Ibe, told the court that the respondents had filed an appeal against the earlier order of the court.

Ibe said that notices of the appeal and stay of proceeding, notice of preliminary objection and affidavit contesting the contempt order against the respondents had been served on the claimant., Counsel to the plaintiff, Chief Ken Njemanze (SAN), said that his client was not aware of any appeal by the respondents as claimed by their counsel.

Njemanze said they looked up to the court on the earlier order made against the respondents, adding that their attitude amounted to total disrespect of court.

“What is discouraging to us in this suit my Lord, is the intentional act of frustrating progress in the suit by the defendants.’’

Alagoa, hearing the arguments of the counsels, made the subsequent order and fixed May 2 for continuation of the matter.

Iheancho had gone to court over the demolition of part of his property on Orlu Road in Owerri Urban by construction workers engaged for road expansion by the state government.

CAC to Reduce Cost of Small Business Registration to N5,500