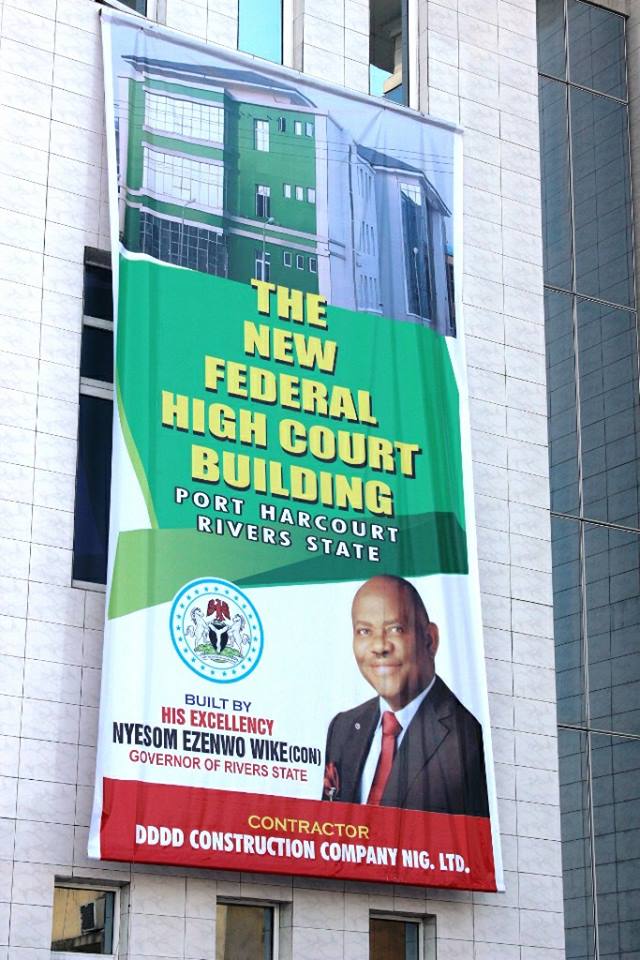 Reason for constructing and delivering the new Federal High Court Complex of the Port Harcourt Division to the Federal Judiciary is a demonstration of patriotism and determination to increase access to justice in Rivers State.

The hand-over of the Complex which houses six courtrooms was preceded by a formal commissioning by the Chief Judge, Federal High Court, Justice Ibrahim Auta on Friday .

He said: “We therefore resolved not only to complete all stalled court projects but also, to initiate new ones to meet the increasing demand for judicial services by our people.

“In a country such as ours, where the justice delivery system is pretentiously federal but manifestly unitary, our quest for having the most modern and advanced court houses and justice system cannot be completely achieved if we limit our judicial transformation agenda only to State Courts.

” This is part of the reason behind our inclusive and non-discriminatory policy thrust of providing modern court buildings and necessary operational support to Federal Courts at enormous financial cost to Rivers taxpayers.”

Governor Wike emphasised: “Let it also be known that we have built this courthouse to serve and advance the public interest and not to satisfy any other self-promotive motives. Accordingly, we have fulfilled our duty as leaders who mean well for our country and its progress.

“All that we ask in return is for the Federal Government to provide for the regular care and maintenance of this building so that its functionality is preserved for the use of the present and future generations.”

The governor regretted the hunting and hounding of a small band of targeted judges to prison in Gestapo style even before allegations against them were investigated.

He said such actions amount to political witch-hunt and practical strategy to browbeat the judiciary into submission.

He said: “This nation must find better ways of fighting judicial and other corruptions with all the seriousness they deserve within the framework of the rule of law instead of entertaining the gullible public with a phantom and tendentious actions against corruption.”

He commended Governor Wike for his commitment to the provision of the relevant infrastructure for the Federal High Court, pointing out that the court will dispense justice according to the law.

He said that following the official hand over, the court will begin to use the facility on Monday.

Attorney General and Commissioner of Justice, Emmanuel Aguma (SAN) said all the Wike administration has done in the last two years is to open courts and create access to justice.

Former President of the Nigerian Bar Association, Chief Onueze Okocha said the hand over of the Federal High Court complex is an addition to the testimonials of performance for Governor Wike.