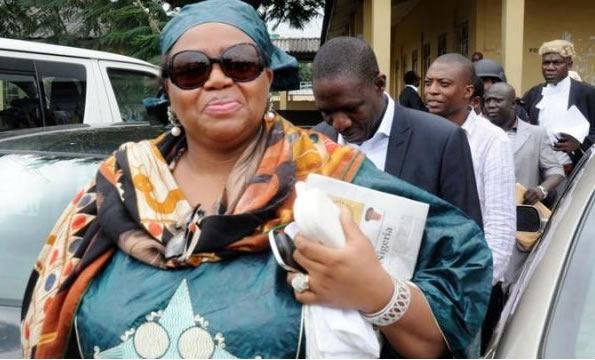 The Chairman of Ontario Gas and Oil Nigeria Limited, Walter Wagbatsoma, the Managing Director, Adaoha Ugo-Ndagi and the company have been found guilty of defrauding the Federal Government to the tune of one point nine billion naira.
Justice Lateefa Okunnu of a Lagos High Court sitting in Ikeja found them guilty on the eight-count charge preferred against them by the Economic and Financial Crimes Commission, EFCC.
The Court concluded that the prosecution was able to prove beyond reasonable doubt the allegations that the defendants made false fuel subsidy claims.
However, Justice Okunnu discharged and acquitted the fourth defendant, Fakuade Ebenezer, who is a representative of the Petroleum Products Pricing and Regulatory Agency, PPPRA.
Meanwhile, there was a mild drama in court when the second defendant, Adaoha Ugo-Ndagi slumped and fainted before the judge pronounced the verdict of the court.
Wagbatsoma, Ugo-Ndagi and the oil company were charged to court on July 7, 2010 when they obtained the sum of one point nine billion naira by false pretence from the Federal Government purporting the money to be subsidy payable to Ontario Oil and Gas Nigeria Limited.
The offence is among several others brought against them by the Economic and Financial Crimes Commission, EFCC in a case of conspiracy, obtaining property by false pretence, forgery and altering of documents.
Sentencing has been deferred till Monday.
Barnabas Hunjo