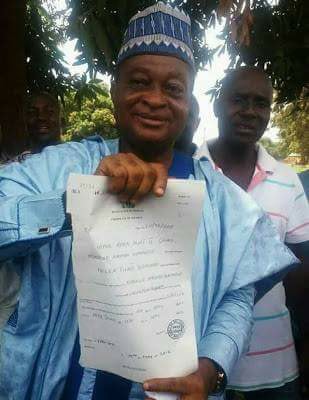 Justice Ahembba Ikpambese Ichol, a High Court Judge who was also in contention for the stool of the paramount ruler in Benue state (Tor Tiv) has finally divorced from his wife, Hon. Helen Ikpambese, a former caretaker Chairman of Kwande Local Government Area of Benue State.

The newly divorced Justice is seen displaying his divorce certificate at the Upper Area 2 Magistrate Court in Gboko shortly after the judgement annulling his marriage was pronounced.

According to witnesses, there was high jubilation in the courtroom after the divorce pronouncement. His supporters broke out of the court in jubilation and started singing a song in Tiv saying, “Ormee Ayem Tar Na Chaje!”