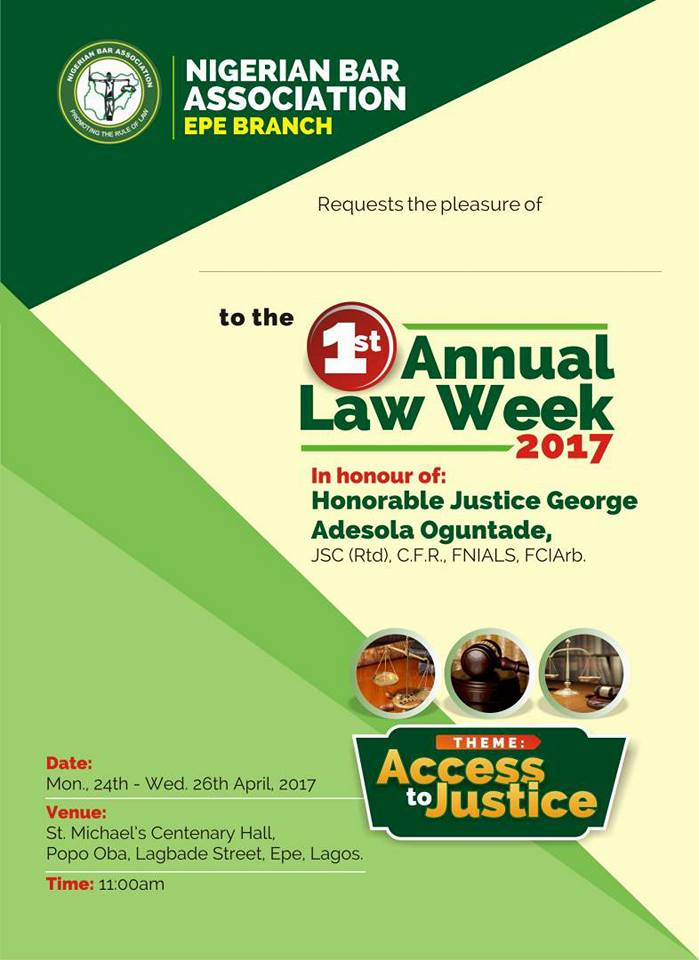 Prof. Olanrewaju Fagbohun has said that ‘holding charge’ has both statutory and constitutional backing in Nigeria. In his view, the bulk of the challenges confronting the use of holding charges and pre-trial remands are caused by negligent abandonment of pre-trial suspects in prison custody.

Prof. Fagbohun made this remark in his keynote address on the topic Holding Charge And Remand In Prison Custody  Prior To Trial: An Agenda For Urgent Reforms” at the ongoing NBA Epe Law Week.

The Professor of Environmental Law and  Vice Chancellor of the University of Lagos who was the keynote speaker  was represented by Mr. Qudus Mumuney at the event which was attended by members of the bar and the bench in Lagos State.

In his speech, Prof Fagbohun state that Holding charge and detention or remand of an accused person in prison custody forms part of the pre-trial stage of our criminal justice system and is a concept  which has been widely and erroneously criticized by both the  appellate courts and writers.

He said that the totality of the opinions expressed by both writers and lawyers is that holding charges is a gross violation of rights to liberty and fair hearing but on the contrary  both concepts are provided for  in Federal and State statutes. He referred to the Administration of Criminal Justice Act (ACJA) 2015 and Lagos State Administration of Criminal Justice Law (ACJL) 2011 as well as the Constitution of the Federal Republic of Nigeria and held that “the position now is that a magistrate court need not have jurisdiction to try an offence before having jurisdiction to make a remand order in respect of same.”

He noted that what is needed is rather a reform of the concept and effective use of holding charge as provided for by the law.  “the bulk of the challenges confronting the use of holding charges and pre-trial remands stem not so much from the presumption that holding charges and pre-trial remands, ab initio, violate constitutionally guaranteed rights. Rather, they relate more to the challenges and inefficiency that have characterized the administration of criminal justice system in Nigeria. Some of these challenges include deliberate & negligent abandonment of pre-trial suspects in prison custody which ultimately results to prison congestion; lack of follow-up of remand cases by remanding judges/magistrates as required by the law; lack of or poor investigation of criminal allegations by police officers before application for remand orders, among others.”

Mr. Qudus Mumuney while delivering the keynote speech on behalf of the Vice Chancellor noted that Lawyers also share some blame in the unnecessary use of law enforcement agencies to enforce civil and contractual obligations. He noted that it has become common place for lawyers to recover debt in civil cases by deliberately writing petition with criminal coloration to bring same within the jurisdiction of the police who in turn use intimidation, harassment and detention to recover debts.

Others panelists who spoke at the event expressed the same concern and condemned the  high handedness of law enforcement agencies and the need to curb their excesses. Mr. Ayodele Akintunde in his speech advised magistrates to always apply practical and realistic measures on the issue of remand in custody particularly when it has to do with family and domestic affairs.

The first ever NBA Epe Law week commenced on Wednesday, 21st April, 2017 with a visit to the Ikoyi/Kiriri male prison and a Jumat service held at Aleke Central Mosque Epe. There was also a novelty football tournament on Saturday and a thanksgiving service held that the St Michael’s (Ang) Church Popo Oba, Lagbade Street, Epe, Lagos.

Lectures on contemporary legal topics relating to the theme of the Law Week “Access to Justice” were held with notable dignitaries present and represented.

The NBA Epe Law week will end on Wednesday April 26th with a dinner at 4pm.

‘S/Court Affirmation of EFCC’s Powers is Victory for Anti-Graft War’ –...