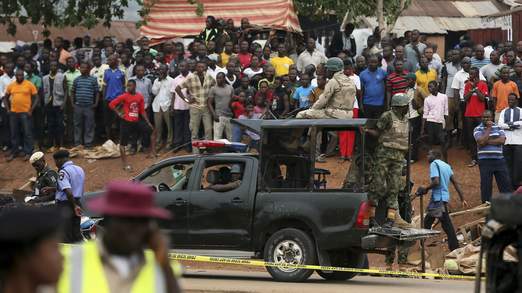 Two human rights lawyers – Ebun-Olu Adegboruwa and Jiti Ogunye – have disagreed on whether it was right to deploy soldiers around the home of Independent Peoples of Biafra (IPOB) leader Nnamdi Kanu.

There was a shooting on Sunday near Kanu’s residence, which led to a clash with IPOB members, culminating in the state government imposing a curfew.

Adegboruwa said the “clampdown on civilians by the military” in a democracy cannot be justified.

He said: “The military quelled the Shiites’ peaceful rally in Zaria, sacked civilian communities in the Niger Delta, supervised elections in Rivers and other places, mowed down peaceful gatherings in the Southeast and even took over Premium Times’ office in Abuja a while ago, in a supposed democratic government led by civilians

“I’ve read people and even comrades and enlightened ones prodding them on, defending the military to carry on ‘python dance’, in the midst of civilians and locals.

“The next phase of this hidden agenda is a takeover of civilian authority, because when the ‘python’ has finished ‘dancing’, it must surely swallow something, to quench its usually large appetite.

“Let the military go back to their barracks and submit to civilian authority. There is no insurrection going on in any part of the Southeast now, to warrant the display of military force or deployment.”

But, Ogunye said it was wrong for anyone to argue that it was unlawful to deploy the military or that soldiers have no right to carry out their operation.

According to him, the Southeast was still a part of the Nigerian territory, adding that even if secession or separation was desired by some, it was yet to be accomplished.

“The Southeast is not a Biafran enclave that Nigerian soldiers who are stationed in the Southeast must not dare to enter. We are familiar with the term ‘Military Zone – Keep Off’. Umuahia and its streets are not IPOB Zone or territory that the Nigerian state must concede to IPOB.

“Under Section 217 (2)(c) of the 1999 Constitution, the Armed Forces  have a constitutional duty  to ‘suppress insurrection  and act in aid of civil authorities to restore order when called upon to do  so by the President,  but subject to such conditions as may be  prescribed by an Act of the  National  Assembly’.

“The argument could be made that the military could not lawfully invade Kanu’s residence.  But it makes no legal sense to argue that the Nigerian Army that was praised in the past when it combed the Abia State forests to rid it of kidnappers when the Police Force was overwhelmed …have no lawful authority to embark on military patrol or carry out reconnaissance mission even as a preventive or pre-emptive  exercise,” Ogunye said.