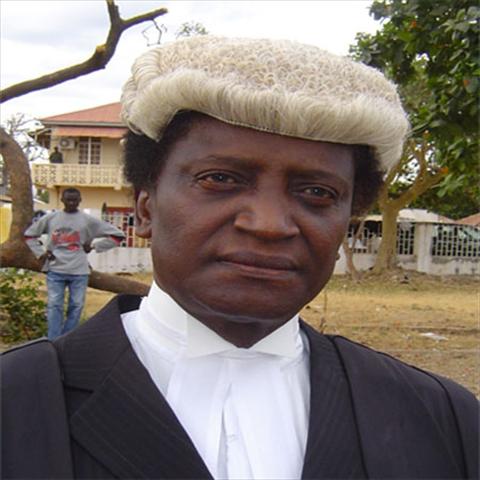 Edu Gomez, the lawyer of outgoing leader of The Gambia, Yahya Jammeh, has fled the country to neighbouring Senegal after penning the president a letter to step down from office in the interest of peace.

Mr. Gomez who represented Mr. Jammeh and his party, the Alliance for Patriotic Reorientation and Construction, APRC, in their failed attempt to have the country’s Supreme Court overturn the victory of the President-elect, Adama Barrow, and stop his inauguration as President.

In his letter, Mr. Gomez claimed he was made to work under “tremendous pressure and coercion” as the lawyer of the now largely isolated leader and his party. He added that he could not refuse to work for Mr. Jammeh and his party, like other lawyers in the country, because he was on a retainer.

“On Tuesday 17th January 2017, my son and I took a crucial decision to seek sanctuary in the sister Republic of Senegal. This was found necessary due to the mounting fear and rapidly increasing tension at every passing moment,” he wrote.

“The general perception is that after midnight on 18th January 2017, the mandate of President Yahya Jammeh would expire and President-elect Mr. Adama Barrow would be sworn-in as president, in line with the dictates of our constitution. Any attempt to interrupt this ceremony, it is clearly understood, opens the Gambia to attack from ECOWAS forces.

“As a legal practitioner representing President Jammeh and the APRC the party in the ongoing petition filed on his behalf at the Supreme Court of the Gambia, I have to admit that I was working under tremendous pressure and coercion. All the lawyers with established practices in the Gambia refused to be associated with the said petition. As a retainer for the ruling APRC party, I could not refuse the brief on professional grounds, despite my apprehension.”

He said he and his family fled to Senegal having successfully eluded the 24 hour military surveillance he was placed on.

He advised Mr. Jammeh to step down so as to avoid a gruesome end to his presidency and in the interest of peace and the safety of the Gambian people.

“Having fortunately eluded the 24 hour military security around me and my family, I managed to arrive in Senegal where I now gained safety, respite and mental stability. In my present situation, I humbly and respectfully advise President Jammeh as the champion of peace he has been known to be to peacefully step aside in the interest of peace and safety of the Gambian people.

“Everything, except God’s Kingdom, comes to an end. I advocate for a peaceful end rather than a violent and gruesome end. Please in the name of Most Merciful God do not allow your legacy to be described as one where “pen of the sword dipped in innocent blood writes its history on the rough page of tyranny”, he said.

Meanwhile, on Wednesday, Mr. Jammeh turned down a last ditch effort by the President of Mauritania, Mohamed Ould Abdel Aziz, to convince him to step and aside and rescue him to exile.

Mr Aziz arrived Gambia just as ECOWAS troops prepared for a military action in the country.

NBA to Sponsor 100 Young Lawyers to the 2017 Conference