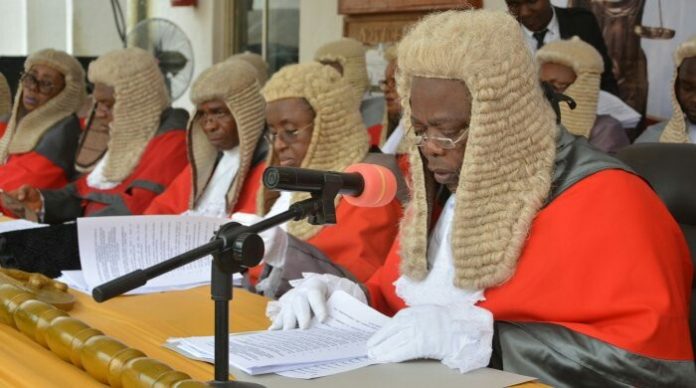 The disagreement over what should be the official name of a community in Orumba South Local Government Area of Anambra State, has gradually degenerated into a full blown controversy.

The controversy has led to name-calling and buck-passing among contenders. All of them looking up to the judiciary for solution to their problem, as the process of change of name for the town is now a subject of litigation. Because of this, the name of the town that will be officially attached to the high court becomes even more problematic. As a result, petitions and counter petitions have been written by individuals and groups involved in the imbroglio, as well as complaint from adjourning towns and villages who felt concerned in the ongoing debacle.

Unfortunately, the Anambra state judiciary under the leadership of the Honourable chief Judge, Justice Peter Umeadi, had become the centrepiece of all the knocks and hits by all the sides in the crossfire. Well, this is understandable, as all the dramatis personae invariably belief that the judiciary must find a solution to their disagreement and that the solution should hopefully be favourable to their sides, either by hook or by crook.

The side, of the conflict led by one Barr. Basil Igwike belief that the name of the town cannot and have not been properly changed, had gone ahead to write petitions with threats of claiming imaginary connivance between some  judicial officers and their opponents (led by one Dr. Godwin Maduka) to establish a court in the town as a ploy to legitimize the alleged unilateral change of the town’s name.

Similarly, Dr. Godwin Maduka’s side through one Ramond Onyegu have written severally against the judicial service Commission headed by the Chief Judge seeking to armtwist the judiciary into making use of a court built in an area that is under litigation.

Yet, Umunze town is also alleging that the Chief Judge was collaborating with some wealthy men of another town to establish a very important public infrastructure far away from the local government headquarters. They are contending that such public institution should be sited at Umunze, which is the headquarters of the Local government.
Moreso, Ufuma town are claiming that the court should have been sited within their area, because it is easily accessible to all the towns in Orumba north and south Local Government Areas, within the proposed Orumba judicial division. Hence, their accusation that the Chief Judge was supporting the establishment of a high court in a far away, crises ridden, and remote town  which is a border community to Abia State.

As it stands, the judiciary has inadvertently been caught in the middle of raging cross fire.

All the sides to the conflict have employed all manner of tactics, unethical conducts and mischief to threaten and blackmail the state Chief Judge, to the extent of involving Bishops, top government officials and heads of various security agencies hoping to compel the Chief Judge to accept or do the bidding of either of the side against the other sides. But thanks to the unparalleled strength of character, and unflinching commitment to justice, equity and good conscience being exhibited by Justice Peter Umeadi in the matter thus far.

Consequently torrents of petitions were channelled to the governor of the state, the high command of various security agencies, reputable traditional and religious leaders, the Chief Justice of Nigeria and the National Judicial Commission, just to mention but a few. These plethora of mischievous petitions were all in the desperate bid by those involved in the impasse to box the Chief Judge to a corner just to achieve their ends.

It was in the interest of fairness and justice as well as the need to uphold the tenants of rule of law that the Honourable Chief Judge held several meetings with the Chairmen and secretaries of all NBA branches in the state, with a view to resolving the logjam regarding  the proper designation of the  new court premises. And this must be done without prejudice to the case pending before the supreme court concerning the same subject matter. The series of meetings resulted to the approval of an enlarged Alternative Dispute Resolution Committee.

ALSO READ   The Law, the Trinity Lawyer and the Theatre of the Courtroom

The terms of reference for the committee were clearly spelt out as follows:

“1.  To use Alternative Dispute resolution to resolve the issue of what name the High Court would bear.

2.  To facilitate a situation where the judiciary of Anambra State would not have to contend with an ongoing litigation in a bid to take over the premises of the High Court, post personnel there and make it functional.

3.  To remove permanently any issue which would impinge on the exclusivity or independence of the High Court as a place of session for the Judiciary which would reinforce the public confidence and acceptability as a place where members of the public would have equal and unfettered access”.

Mandatorily, the committee was required to sit in a place that is open and accessible to the public, as well as invite lawyers representing all the interest groups in the matters for the sake of equity and fairness.

The Anambra state judiciary ably led by the state Chief Judge, Justice Peter Umeadi has chosen to follow the path of Peaceful settlement, as arbitration is globally acclaimed to be a better and veritable alternative to litigation (considering his background as a Fellow of the chartered Institute of Arbitration).

However this subtle diplomatic move towards crises resolution cannot be allowed to take away the right of individuals/groups to be heard by a court of law. But should be seen as a move towards reaching a common ground that would be acceptable to all concerned.

Lawyers to the major contenders in the conflict were invited to join the committee, namely Dr M.N Umenweke and Barr. Chuka Obele Chuka, in order to achieve the necessary balance that is needed for an acceptable resolution to be reached.

The wisdom of the state Chief Judge to appoint only lawyers into the committee is quite commendable, as that would help reduce to the barest minimum, the temptation to unnecessary anger, emotion and rancour that may arise during deliberations and pose a clog in the wheel of progress if laymen are allowed into the committee.

The committee should therefore act within the ambit of their mandate as encapsulated in their Terms of Reference to avoid the lure of playing to the gallery, or over stepping their bound. This, they must achieve by not descending into specific issues  that may be sub-judis to pending cases in courts.

The proposition by some individuals that some past and present government officials, heads of security agencies and church leaders should be invited for questioning, would certainly be counter productive; as the committee is neither a Panel of Enquiry, nor is it a Truth and Reconciliatory Commission. It would be the duty of the state government to constitute such panel/commission if it so wishes.
Thus, the committee should focus on its role of recommending possible ways of opening the new court that was built and donated by an individual, sited within a community that is locked in a crisis of name-change. Bearing in mind that no matter how magnanimous or philanthropic the donor may appear to be the court must have a town name it must bear, for proper addressing and records. Yet, the judiciary should be extricated from being at the receiving end of a desperate move by some money-bags who want public infrastructure to be sited in their communities by all-means; and force public officers to stamp the name of their communities on such public building without due process.

Omenyi Ejiofo, is a Journalist based in Awka, Anambra State.

Okutepa Faults Ozekhome’s View on what Constitute Division in a Political...