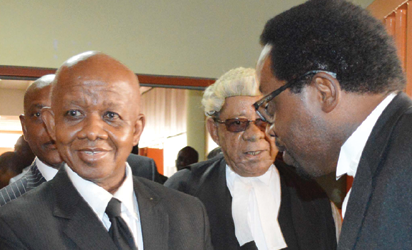 An Abuja High Court on Wednesday cleared the path for Justice Adeniyi Ademola of the Federal High Court, Abuja, to resume sitting, when it dismissed the 18 criminal charges filed by the federal government against him, his wife, Olabowale, and a Senior Advocate of Nigeria (SAN), Mr. Joe Agi. The trial judge, Justice Jude Okeke, also discharged and acquitted the three defendants on the grounds that the prosecution failed to establish a prima facie case against them.

Justice Ademola was one of seven judges whose residences were raided by the Department of State Services (DSS) last October on allegations of corruption.

He was arrested and subsequently charged to court by the federal government, compelling the National Judicial Council (NJC) to direct him and other judges with similar allegations against them to stop presiding over cases at their courts until they were cleared of the corruption charges.

Justice Okeke, in a ruling which spanned over two hours on a no­case submission filed by the defendants, described the charges brought against them by the federal government as highly speculative and without an iota of merit.

The judge, who reviewed the 18 counts one after the other, said the conspiracy charge in count one was not established against Justice Ademola, his wife and the senior lawyer, who was charged along with the couple. Contrary to the provision of the law, Justice Okeke said that the prosecution did not in any way prove the ingredients of conspiracy against the defendants, as it failed to establish where they met and conspired to commit any crime. On the alleged N30 million gratification found in the account of Mrs. Olabowale Ademola, which was said to have been donated by a group of lawyers during her daughter’s wedding, the judge said that the prosecution failed woefully to establish that the donations by the lawyers were meant to influence cases before Justice Ademola, if at all there was any.

The judge said that a witness of the prosecution made it clear to the court that there was no evidence linking the donation for the marriage ceremony to influence any matter before the first defendant, hence the judge dismissed the charge on the grounds that the prosecution failed to discharge the burden of proof on it.

The judge therefore dismissed counts three, four and five, which bordered on the receipt of gratification in the charge

On the BMW car said to have been delivered to Ademide Ademola, son of Justice Ademola, the judge said that from the beginning to the end of the transaction that led to the delivery of the car, the prosecution did not establish any link to prove that Ademide Ademola negotiated in any way on behalf of the first defendant.

Justice Okeke further held that count nine was bereft of evidence against Justice Ademola because there was no iota of evidence, both oral and written, that the vehicle in question was meant for the judge as all documentary evidence, including the invoice pointed to the fact that Ademide negotiated for the car and it was even delivered to him in his house, a fact not disputed by the prosecution.

On the foreign currencies found in the residence of Justice Ademola, Justice Okeke held that the prosecution failed to establish against the first defendant that he acquired the money through unlawful acts and that none of the prosecution witnesses who testified on the charge was able to prove that the money was acquired through fraudulent means as required by law.

The judge also said that he believed the evidence provided by Justice Ademola that the two guns found in his house belonged to him and another judge of the Federal High Court, A. R. Mohammed, having tendered before the court and without contradiction from the prosecution, the letters approving and releasing the two guns to them on different dates by the appropriate authority.

The court held that there was no evidence that the prosecution ever demanded that the defendants produce the licences and that when provided and admitted by the court, the allegation of the prosecution became empty.

Apart from tendering the letters of authority releasing the gun to him, Justice Ademola went a step further to tender the operational licence for the gun, hence the charge on the unlawful possession of firearms crumbled like the previous ones. In all, Justice Okeke held that the prosecution failed to establish a prima facie case against the three defendants by failing to provide evidence to link them with the alleged offences and consequently dismissed the 18­count charge against the defendants, discharged and acquitted them from the alleged offences. A no case submission was made by the defendants after the prosecution had closed its case against them on February 21, stressing that there was no need to enter a defence.

Counsel to Justice Ademola, Onyechi Ikpeazu, at the March 15 sitting of the court, maintained that there was no evidence to further sustain the case. On the count of acceptance of gratification, the counsel had argued that the evidence of prosecution witness 16, Babatunde Adepoju, who is an operative of the DSS, had adequately proved otherwise. Ikpeazu noted that he was the witness that carried out the investigation on the defendants, and he had told the court that he could not link the alleged gratification with any case handled by Justice Ademola.

In his argument, counsel to Mrs. Ademola, Chief Robert Clerk (SAN), also argued that his client was charged with conspiracy, an offence that was not recognised under the Penal Code. On the statement that she fraudulently enriched the first defendant, the counsel expressed surprise that the word “conspiracy” was attached to a man who was alleged to have committed an offence. He had argued that the prosecution should establish the case or cases for which the money was allegedly paid as inducement. According to him, no single witness had testified to have given the amount as bribe, neither did any of them point to any monetary transfer from the accounts of second or third defendants to that of the first defendant. Counsel to the third defendant (Agi), Jeph Ejinkonye, had urged also the court to take another look at the account of prosecution witnesses to see if there was any need for his client to enter a defence.

Adepoju then admitted that it would be mere speculation to say that the gift given to the first defendant by President Muhammadu Buhari’s lawyer was a bribe. Based on the above statement by him, Ejinkonye had urged the court to uphold the no­case submission and strike out the case. But the prosecution counsel, Segun Jegede, had opposed the no case submission, insisting that the defendants had a case to answer. The counsel believed that the witnesses actually established a prima facie case that money was paid by the third defendant into the account of the second defendant in March 2015.