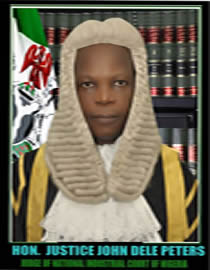 A judge of the National Industrial Court of Nigeria (NICN), Justice J.D. Peter, has ordered activist lawyer, Mr. Femi Falana (SAN), to appear before him over comments credited to him.  Falana was reported to have said that Nigerian courts had become “supermarkets where only the rich do their shopping” during the opening of the Enugu branch of the Nigerian Bar Association Law Week.

The Lagos lawyer who was the guest speaker at the event with the  theme “Corruption and the Justice Sector: Implications for the Rule of Law and Democracy.”

The lawyer was also said to have attacked the NBA for condoning corruption, saying that the body’s national election had become even more expensive than a governorship election, with each candidate spending as much as N700m during the association’s presidential poll. Falana asked the National Judicial Council and the NBA to restore integrity to the judiciary by identifying and exposing corrupt judges and lawyers.

However, a lawyer from Falana’s chambers had on March 28 appeared before Justice Peter, who sits in Court 5 at the Lagos Division of the National Industrial Court. The lawyer appeared in the court regarding a case, marked NICN/LA/601/2012 involving Chief Ebenezer Ayodele Obadimu vs G. CAPPA Plc. Falana’s chambers is representing the judgment­ creditor in the case and had then taken an application seeking to enforce the judgment through a garnishee procedure.

The Judge drew the counsel’s attention to an online publication in which Falana had described courts as “supermarkets where only the rich do their shopping”. The judge subsequently adjourned the case for Falana to appear personally in court to explain “if he obtained the judgment by purchase from the judicial supermarket and for how much”. He adjourned the case till May 13, stressing that Falana must appear in court to say how much he paid for the judgment which he sought to enforce.