The Chief Judge (CJ) of Lagos State, Justice Opeyemi Oke on Thursday freed four inmates of the Badagry Prisons, Lagos in line with efforts to decongest prisons in the State.

Although, the number of inmates that were expected to regain freedom was nine, five others were returned to face formal constitutional charges due to the gravity of their offences.

The names of those released were Sharafadeen Sheu, Israel Emmanuel, Samodu Rasak and Tunde Ojo. Oke released the inmates who were awaiting trial during her visit to the prison facilities on Thursday.

The released inmates were boys between the ages of 17 and 19 years.

In her speech, Oke admonished the pardoned inmates to “go and sin no more”, adding that all the Judges including herself are praying for them to have good job so that they would not be arrested because of wandering and joblessness.

She said the gesture was aimed at reducing congestion at the prisons and release some inmates who had been awaiting trial for many years.

“I don’t know why having no work has turned to criminal offence”, she queried.

Oke maintained that the reason why the five others were returned to prison was to allow them face the constitutional consequences of the offences committed and further serve as deterrent to others.

She said the judiciary would complement the Lagos State Government to ameliorate the plight of inmates in all the prisons just as she commended the State Governor, Mr Akinwunmi Ambode, particularly on the commissioning of the new Magistrate court in Badagry, which according to her would further aid quick dispensation of justice in the state.

Earlier in his address, the Deputy Controller, Badagry Prison, DCP Esan Patrick, commended the CJ for the visit and also for bringing hope to the hopeless by releasing those awaiting trials, praying that God would reward her and her team. 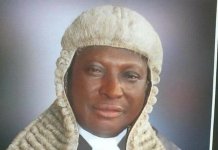