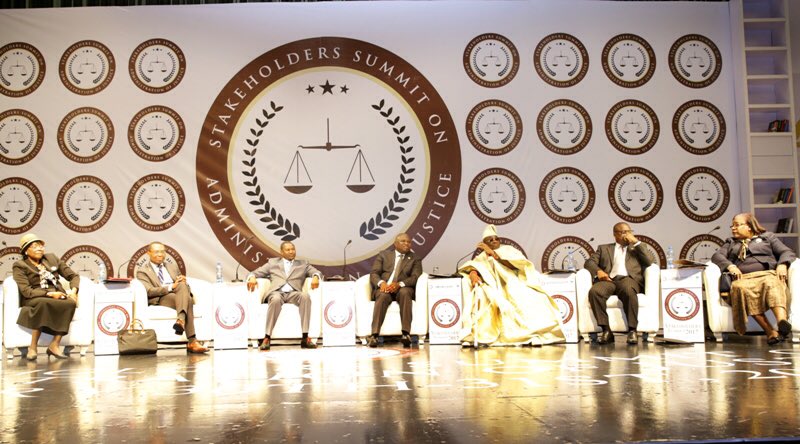 The Federal Government says it is has commenced a number of initiatives to eradicate delays in the administration of justice.

The Acting President, Professor Yemi Osinbajo, who made this known in an address to a two-day summit organized by the Lagos State Ministry of Justice, identified  improper record keeping and lack of dedication to duty on the part of some stakeholders as the bane of the nation’s judiciary. The summit which has as its theme; Contemporary Trends: Catalysts for Justice Sector Reform in Lagos State, is aimed at discovering ways to further strengthen capacity in the sector.

Professor Osinbajo who highlighted the importance of data in the administration of justice and the negative impact the lack of proper record keeping has had on the nation’s image at home and abroad said the Buhari administration had rolled out measures to strengthen the Police and other government agencies in the sector.

Represented by the Attorney-General of the Federation and Minister of Justice, Mr Abubakar Malami (SAN), the Acting President  said that findings conducted by national and international bodies had shown that stakeholders in the sector were responsible for the delays in the administration of justice  and canvassed an attitudinal change among the stakeholders.

He condemned the attitude of some judges who would not sit on time and rise early and lawyers who file frivolous applications and employ other delay tactics as well as shoddy police investigation, and admonish them to desist from such.

“If we can agree that these problems are against our collective interests as practitioners and stakeholders, then we must make a firm commitment to tackle the problems by changing our attitude and standing up for what is right,” Osinbajo said.

Noting that Lagos State has the highest number of unsentenced detainees, the Acting President tasked participants in the summit not to make it another talk shop but to put forward suggestions which will not only impact positively on the justice sector in Lagos alone, but also in Nigeria as a whole.

In his remarks, Governor Akinwunmi Ambode advised participants to generate constructive ideas which would make his administration’s vision of a 21st century justice sector driven by digital technology and powered by digital literate judicial officers and legal services providers a reality.

“As a government, we are well aware that to achieve our socio-economic goals of a safer, secured, peaceful and more prosperous Lagos State, we need a functioning justice sector, which guarantees not only the maintenance of law and order, the enforcement of human rights and freedom, but also provides an administration of justice ambience that protects investments and encourages economic development”, says Ambode.

The Lagos State Attorney-General and Commissioner for Justice, Mr. Adeniji Kazeem expressed the hope that the summit would put forward a robust discourse on how to enhance speedy dispensation of justice, discipline of members of the inner and outer bar as well as performance indicators for the sector.

Participants in the summit called for creation of specialized tribunals to assist regular courts in handling certain matters for effective and quick dispensation of justice.