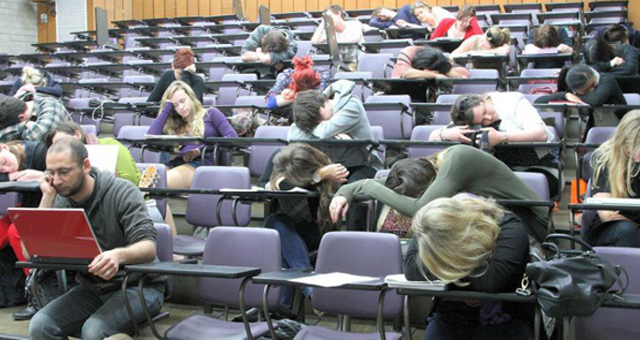 Make way for the internet age of legal education

The next five years or so will see the end of the law lecture as we know it, according to an Oxford academic who thinks they’re “a pain”.

Trinity College fellow Nick Barber, a constitutional lawyer, believes lectures can be fun but have serious shortcomings. Writing for the UK Constitutional Law Association, of which Barber is founder editor, he says:

Dragged into a lecture that can last for an hour or more, a moment’s lack of concentration can mean important points are missed — and few in the audience will only suffer a moment’s inattention.

Realizing their flaws and later stating they may soon become unnecessary, Barber bets “the old-style lecture will only last [a] little while longer.”

In their place, Barber argues, will be blog and vlog posts. In his words:

There is little to say in favour of the old-style lecture now that we have the capacity to produce, reasonably cheaply, video podcasts (vlogs). At the moment, when the internet is used, when recordings are made, there is a tendency to record entire lectures and make them available to students or to the public as a whole. This makes for dull viewing. This is a process that is already beginning, but I suspect that lectures will increasingly be replaced by shorter, fifteen or twenty minute, vlogs that will be designed for the medium; that is, they will consist of lecturers talking to camera, perhaps with slides incorporated into the broadcast.

Barber — who wrote a separate blog post days after the EU referendum which apparently sparked the Article 50 Miller case — continues:

A series of these vlogs will then combine to cover the material that used to be covered in the lecture. The good news for lecturers is that the set of vlogs that replaces lectures will not need to be re-recorded each year (and, indeed, they need not be recorded in the heat of term-time). The good news for students is that these vlogs can be watched when most useful, paused, and viewed a second time if necessary.

Legal academics must start positioning themselves for these changes, likely to take hold in the next five years — but there’s one teaching medium Barber is less sure about. He says:

I have had a look at some of the Twitter feeds of some of my colleagues, and it was not an edifying experience. The very nature of Twitter (and, to a lesser extent, Facebook) encourages ill-considered and ill-tempered publishing; rapid and controversial comments are rewarded.

While Barber, an associate professor and non-practising barrister, presents the changing nature of legal education as an opportunity academics can get stuck into, the blog post’s conclusion is perhaps a little more sombre. Echoing Professor Richard Susskind — who has long argued it’s simply a matter of time before tech drastically changes the legal profession — Barber says:

It is likely that there will be significantly less work for lawyers to do, as computers take over the more straightforward legal tasks, and, at some point, computers will be able to teach some legal skills to students as well as, or even better than, tutors. We will almost certainly need fewer lawyers and fewer law-teachers.

With the legal education landscape soon to have a Solicitors Qualifying Exam-style makeover, is now the time to debut these robot-esque tutors? Time will tell.