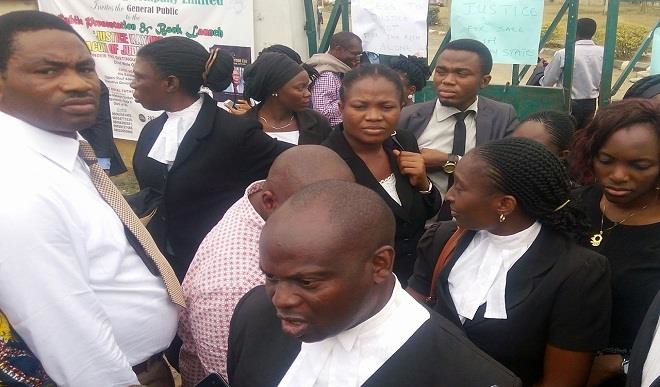 Lawyers in Osun state capital Osogbo have barricaded a high court in Oke-Fia area of the state to protest decision of the state judiciary to increase filing fees and other administrative charges in courts.

Some of the protesters Some of them read, “Justice is Not For Sale in Osun State”, No To Exorbitant Filing Fees”, “Say No To Commercialization of Justice In Osun”.

They are worried the exorbitant filing fees in Osun would make it difficult for ordinary people to pursue justice, noting many might take the law into their hands once they couldn’t approach the cost due to high cost.

The Chairman of the Nigerian Bar Association, Osogbo branch, Asafa Sanusi while speaking with newsmen during the protest urged the state government to intervene by compelling the Osun State Judiciary to reverse the decision.

Reacting to the development, the Permanent Secretary in the Osun State Ministry of Justice, Biola Adewumi in a telephone conversation told Daily Trust that the matter would be resolved in the best interest of justice.