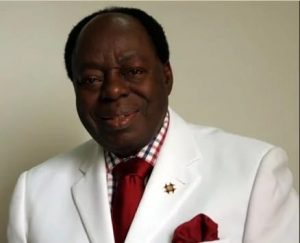 Aare Emmanuel Afe Babalola SAN, CON, OFR is a foremost legal luminary of outstanding brilliance, an exceptional thinker and a master planner, who rose from a very humble background to the pinnacle of his career.

Aare Emmanuel Afe Babalola was called to bar in England in 1963 and became a member of Lincoln’s Inn London, a registered member of the Bar of England and Wales and a most distinguished member of the Nigerian Bar the same year.

He has received several awards, distinctions, fellowships and honours from all over the world. Aare Afe Babalola is an Officer of the Order of the Federal Republic (OFR), and Commander of the Order of the Niger (CON), former Pro-Chancellor and Chairman of the Governing Council of the University of Lagos, Nigeria; former Chairman of the Committee of Pro-Chancellors of Nigerian Universities, winner of the Best Pro-Chancellor award in 2005 and 2006, winner of Queen Victoria Commemorative Award at Socrates Award of European Business Assembly in Oxford UK; member of the Rector of Europe, October, 2007; Vice President, Rector of Europe, 2010; and Honorary Professor of International University. He won the African Award in Education 2011, African Man of the Year in Food Security, 2014. He was conferred with the Congressional Commendation of the US Georgia Legislative Black Caucus and inducted into the African Hall of Fame by the Advisory Board of the African Leadership Development Foundation, Inc. USA, and African Leadership (UK) Limited in 2016.

He has about eleven honorary degrees from several universities including the Doctor of Laws (Honoris Causa) of the University of London in 2015, (the first African to be conferred with the award).

Afe is an active member of the International Bar Association; Fellow of the Nigerian Institute of Advanced Legal Studies and the Chartered Institute of Arbitrators, Nigeria.

He has made outstanding contributions to the development of Nigeria Law and Jurisprudence through eclectic advocacy in court evident from the numerous celebrated cases which he had handled and the notable personalities who are his clients. He has also authored over 500 articles in several books and law journals and has delivered brilliant and diverse lectures at various events.

Through Emmanuel Chambers Aare Afe Babalola has assisted over 2000 lawyers in numerous ways and has trained over 1,500 lawyers and produced over 15 Senior Advocates of Nigeria (the largest from any chamber in Nigeria) 4 of whom became Attorneys General and Minister of Justice of the Federal Republic of Nigeria.

Aare Emmanuel Afe Babalola is a philanthropist of exceptional calling. His passion for development, in general, is matchless as exemplified in his service to the community through several donations to several institutions in Nigeria including; Ekiti state University, University of Lagos, Nigeria Labour Congress Ado Ekiti, Nigeria Bar Association (Ekiti and Oyo State), University College Hospital, Ibadan and Federal Polytechnic Ado Ekiti to mention a little

He is the Founder and Proprietor of one of the fastest growing private University in Africa; Afe Babalola University, which has been described by NUC as the best thing to have happened to Education in this part of the world and a benchmark for other universities.

Aare Afe Babalola is indeed an accomplished frontline Lawyer, an astute administrator, a big time farmer, a matchless philanthropist and a leading educationist in Nigeria.