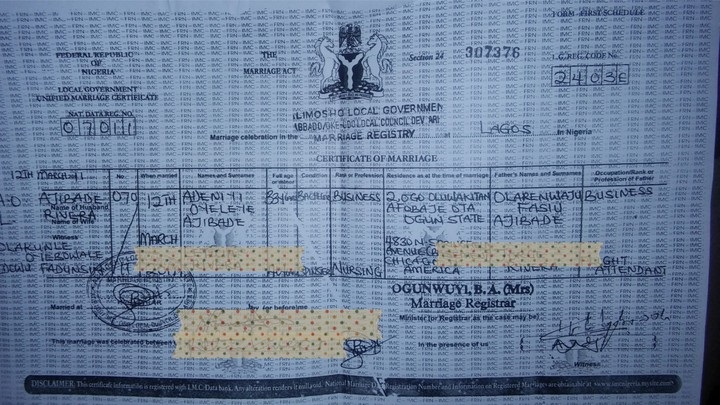 The Lagos High Court on Monday, 15th day of May 2017 delivered a judgement declaring the marriage certificates issued by all local governments in Nigeria illegal and unconstitutional while restraining them from further issuance of “Local Government Unified Marriage Certificate” to Nigerians.

In a class action filed by Consumer Rights Lawyer, Olumide Babalola, Esq., against Ikeja Local Government(1st Defendant)­ and Association of Local Governments of Nigeria(ALGON), (2nd Defendant) who were defendants in the suit, with Suit No. LD/1343GCM/16.

Justice Harrison in making declared that the Ikeja Local Government does not have powers to issue modified and/or customized marriage certificates different from that provided in Form E under section 24 of the Marriage Act, LFN 1990.

The Court also ordered that the 2nd Defendant, Association of Local Governments of Nigeria’s (ALGON) Local government Unified Marriage Certificate” is unknown to our law, unconstitutional, null and void.

An Order that all modified marriage certificates issued by the Defendants be surrendered to the appropriate local government where the marriage was conducted and an appropriate certificate in line with Form E be re­issued to Olumide Babalola. Esq, and all concerned persons.