Home News A Lot of Women do not know Their Rights -Dr. Valeri-Janette Azinge,SAN 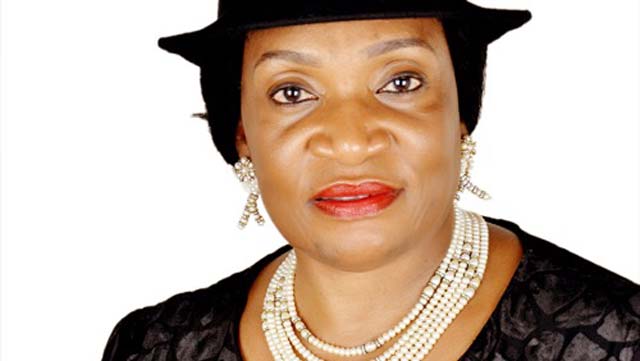 There is no doubt that there are pockets of violence against women across the country. However, some are of the opinion that the rate is increasing daily. Dr. Valeri-Janette Azinge, who was recently conferred with the title of Senior Advocate of Nigeria (SAN) is one of those. She decried the situation and tasked government on human rights awareness campaign. The elated wife of the former director general of the Nigeria Institute of Advanced Legal Studies (NIALS), Prof. Epiphany Azinge (SAN) who marks her birthday today, said the new title comes with responsibilities, one of which is to break barriers that are considered gray areas in law. In an interview with Bridget Chiedu Onochie, she spoke on the fallen standard of legal education, promotion from the bar to Supreme Court as well as the trial of the judiciary in Nigeria.

Nigeria has a penal code and yet there are incessant cases of violence against women and children. How does she react to this? She said our problem as a nation is not about inadequacy of laws.

According to her, Nigeria has lots of laws even though there are some lacuna here and there, to fight violence against women. She noted that there is lack of information in the public domain for women to utilize.

She said: “I subscribe to the fact that civil society organisations should wake up more on their advocacy on the rights of the women and children, and there should also be centres where they can easily run to for succour. I do not think that what the social welfare is doing is enough. We need more centres in every locality so that more cases can easily be reported for prosecution or assistance as the case may be.

If we take the issue of domestic violence seriously, you will find that a lot of women do not know their rights. Even those who know their rights do not want to take up the gauntlet to fight and you cannot force them when they are not willing to even fight for their rights.  So, we also have a problem in our hands in a way of achieving justice. I was once the chairman of the Family Law and Child’s Right Committee of Nigerian Bar Association (NBA). What I did then was for members of the committee to organize awareness seminars. We also invited a woman from Ghana who has fought this war all her life, and which led to the establishment of an organisation in Ghana that fights for the rights of women and children as well as establishment of desks in every Police station for that purpose. And because we invited the Police in Nigeria, the Police has consequently established such desk in every Police Station. But this issue is yet to gain ground from the populace, who do not know their right from their left.”

On some of the few reported cases of violence and level of attention it generated, she said it has to do with criminal justice system and the issues of prove. Once an issue is in court, it follows the rigours of trial and in which case, you have to prove that there is canal knowledge and all that, she stated.

The learned silk, noted that prosecution of such cases are increasing by the day, adding that it was a taboo even mentioning the fact that one was raped, worst still, coming to court to say so before now.

Her words: “Having said that, I still believe that we have adequate laws but sometimes, the woman herself needs to subject herself to the laws. Also, we lack basic infrastructure in the country. We have cases where the rights of children are in jeopardy because there is a quarrel between husband and wife, which has either led to murder or previous harm on the woman and the children, or they are chased out and there is no roof over their heads. Where would they go from there? The juvenile system does not provide them with accommodation while the matter is going on. The Police station is also not the best place to be, and therefore,  the woman is subjected to the same hostile environment, where she goes on with the same torture until the case is proved in court. So, we need to amend our law to create basic infrastructure so that when we have such cases, it would be glaring on you that interim measures are given by the court and also being observed. Right now, if you give such measures, how do you observe them? How can a judge give an order that would not be obeyed because infrastructure are lacking. So, we need such infrastructure to enable one see in practical realities how the law is helping the women and the children.”

Speaking on laws on inheritance as they affect women, Mrs Azinge said the laws are varied. According to her, either we are talking about the Muslim laws, customary rites or religious rites. When you come to the Muslim law, she stated, it is very well defined while customary practice varies from states to another and from one community to another on who inherits and who does not inherit.

She however explained that when there is a marriage under the Act, the wife is considered the next of kin with the children.  “But we have seen a lot of cases in court where, not withstanding all that, the man dies, living a will behind but the families say ‘no’ to the will and go ahead to take over his possessions, and the cases go on in court. Invariably, we find that at the end of the day, the court resolves the matter peacefully. The unfortunate thing is that the justice system in Nigeria is slow but no matter how slow, one will definitely get justice at the end of the day. I do not wish to say that is the fault of lawyers or the judges but we must think about the long hands. The judges write in long hands and no matter what you say,  the lawyers wants to bring all the applications before the matter is heard. This also delays trials and again, everything is reported in long hand. We need to provide the infrastructure in court so that hearing can be in a speedy manner,” she stated.

Mrs Azinge also said the title of SAN imposes a lot of challenges on her. She said: “Everyday as I go to work, I pray to God to enable me leave up to the tenet of being a SAN. To leave up to it in terms of the content of what I have to present in court, in terms of utterances on what the law is and what the law ought to be, on where we are and where we should be going to, and also, my analysis of the law. This is my priority and I am praying God that at the end of the race, I should be counted as one of those who have broken some barriers that were hitherto considered gray areas in law.”

On the presumed fallen standard of legal education, the learned silk said a lot has to do with English language, which is our lingua franca and if we don’t get the foundation right, it becomes a problem.

“Coming to tell me that you met lawyers in court who cannot communicate well in English language goes back to their roots – the foundation, starting from primary school. It is something that cuts across all professions. You meet people who have university degree but they are mixing up their tenses. It is happening everyday but somebody who wants to be a lawyer must have the necessary foundation from the primary to the secondary schools. Also, our university curriculum needs to be tinkered with in order for the practice of law to flourish,”she declared.

On the trial of judicial officers, she said they are mere allegations of corruption that needs to be proven. Her words: “But what worries me is that even though corruption has been endemic in this country, we have never experienced the arrest of the executive or legislature by 2 am, and by breaking the doors in order to get evidence to prosecute them. I believe nobody is exempted from prosecution. If you find them guilty, that is entirely different thing but I must confess that a body that is armed with investigating judge of such allegations should be up and doing. Judges have been alive to their responsibilities but if you feel they have not done enough,  how many petitions have been brought before them that they have not treated? And when there is no petition, should they manufacture one? I would say also with greatest respect that Nigerian judiciary is one of the best in African continent.”