It was my first day at work and I was excited about it. I had just been recently called to the Nigerian Bar and I had looked forward to my first experience as a legal practitioner, where I could put to practice all that I had been taught in school. I had a flair for litigation and couldn’t imagine myself doing anything other than filing of processes and speaking long grammar before a judge. I could hardly wait for this day, and when it finally came, I welcomed it with open arms. Unlike most of my colleagues, I was lucky to have been posted to the firm of a learned Senior Advocate for my compulsory Youth Service year.

I arrived at the office at 8:00am on the dot. I had woken up at 6 to beat the long traffic that characterizes Lagos roads. I thought I was late but by the time I got to the office, the whole place was still locked. I was beginning to get disappointed. It was not until 8:30 before the cleaners and messengers began dragging their feet into the premises. Each passed without as much as acknowledging my greetings. At 9, the lawyers began to arrive. My principal was the last to arrive. Immediately he came in, he called me to his office, hurriedly welcomed me and gave me a short lecture on what was expected of me for the next one year, after which I could choose to continue with them or not. For a start, I was given a case file to represent the firm that morning in court to take an adjournment. I asked for transport and he gave me that look that made me seem stupid standing before him. Well, he replied that the firm does not pay lawyers, not to talk of corps members. With that, he walked away to catch his flight to Abuja and demanded a feedback when he returned. From the little money paid in Camp, I boarded a motorbike to the court as I calculated that I was already late and it would take an hour or so to get to the court from the office if I should board a bus.

The judge was a mean judge, very punctual. I was later to find out that he sits exactly at 9. I rushed into the court. My matter had already been called up and the learned senior advocate on the other hand was already moving a motion that my client’s bail be revoked and a bench warrant be issued against him. I apologized to the judge and immediately moved my motion for adjournment which was immediately refused. I gave countless excuses as to how it was only my first day at work and I was not seized of the facts. All my advocacy skills could only earn me a standown. I realized as I quickly flipped through my file that my client had been accused of rape and I was to cross examine the victim herself today. Now how could I possibly be defending a rapist when I had been a victim of rape as a child? How could I look the young lady in the eye and ask her those stigmatizing questions I was asked some years back. I had a hatred for rapists and I could not imagine that I was actually defending one. I looked across at my client. If only he knew I had a good mind to mess up his case.

The next case was a divorce case. The couple were each seeking custody of their 2 children aged 3 and 1 respectively. I felt the mother should be allowed to take care of her young children but the judge ruled in favour of the husband, his reason being that they were both male children. I watched the children cry as they were being taken away by their father. I hated injustice so much and this was once case I saw injustice play out before my very eyes. I wondered what was with Nigerians and male children that those little kids should suffer the consequences of their parents’ wrongdoing. Poor woman!

We moved on to the next case. It was slated for judgement. I looked at the young man in the dock, he looked so innocent and incapable of hurting anyone. He was just 23 and had been arraigned for armed robbery. Despite his plea of not guilty, he was found guilty and sentenced to death. I noticed he was unrepresented. As he was being led away, I made a mental note of the prison he was being taken to and resolved to go and speak with him before he was executed and if possible, file an appeal.

On and on we went till finally, my case was called up again and I proceeded with the cross-examination. As the court rose for that day, I decided that after my service year, I would bid farewell to litigation. The cases were emotional, the stress was too much and the pay was not worth it. At the close of proceedings, I hurried down to the state CID Panti, Yaba, to meet with my new found client.

My new client was a young man named Nwaboy who was from a poor family and struggled to pay his fees through to obtain his OND in Accounting. He got a job in a company in Lagos and was working to save some money to proceed with his HND. His company was affiliated to a company in China and sold spare parts in Nigeria for the company in china. The company had a policy of altering the amount recorded as sales, thereby fraudulently depriving the company in china of its proceeds and making excess gain for the one in Nigeria. Nwaboy was a born-again Christian and vehemently opposed such deals. He was forced into an early resignation and relocated to his village where he began petty trading. A week later, he was surprised to find policemen in his village. He was arrested in connection with an armed robbery incident involving his company. Guns and some of the stolen items were found in his apartment which the company gave him while he was still in their service.

Nwaboy swore that he knew nothing about it but despite his pleas, he was tried and convicted and sentenced to death. I set to work, squeezing out time from my busy schedule at the office to work on his case. By the next week, I had filed a notice of Appeal at the Court of Appeal, Lagos Division. I returned to my desk at the office that same day to meet a petition from the LPDC accusing me of soliciting which was against the rules of the profession. I was later to find out that the LPDC Chairman was my client’s former boss at the office and he had continually frustrated the case such that no legal practitioner was willing to continue with the case after the first attempt. As I stared blankly at the petition before me, I realized that my career in the legal profession may soon come to an abrupt end, right before it had even began.

(The story here is purely fictional. Any name or designation mentioned here are do not represent any known human). 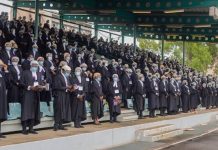