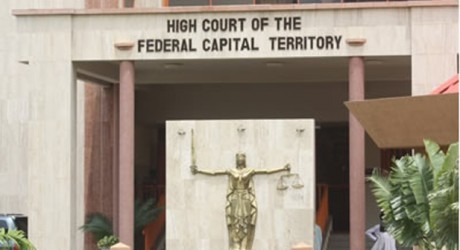 The Police has arraigned Abubakar Yau, a 28-year-old, an applicant for killing a former Nigerian Ambassador to South Africa, Sunday Yusuf of House 17, Younde Street, Wuse Zone 6, Abuja on June 13, 2016.

The defendant, a resident of Daki Biu in Jabi, Abuja was arraigned on three-count charge by the FCT Police Command before Justice Othman Angulu of the FCT High Court, Jabi.

The prosecutor, Mr Adeniyi Oyeyemi, informed the court that the defendant, along with others who are now at large committed felony by robbing the deceased of his property before killing him.

Oyeyemi told the court that the defendant committed the robbery with dangerous weapon by forcefully collecting the sum of N200, 000 and a Samsung handset (Edge 56) from the deceased.

The prosecutor added that after the defendant and others carried out the robbery operation, they stabbed the deceased with knife, which led to his death and threw him from a three-storey building through his window.

According to Oyeyemi, the charges against the defendant are committing felony to wit armed robbery, an offence contrary to Section 6(b) of the Robbery and Firearms Special Provision Act, Law of the Federation of Nigeria (LFN) 2004.

Others are armed robbery with dangerous weapon, an offence contrary to Section 1(1) and 2(a) (b) of the same law and Culpable homicide punishable with death, an offence against the provision of Section 221 of the Penal Code.

The defendant, however, pleaded not guilty when all the charges were read to his hearing.

His counsel, Mr Ganiyu Adegbite, pleaded for his bail, saying that he was still innocent going by the provision of Section 35 and 36 of the Nigeria Constitution.

Justice Othman Angulu, however, refused the bail application and ordered for the remand of the defendant in Kuje prison.

The Judge adjourned the matter to July 11 for commencement of hearing.