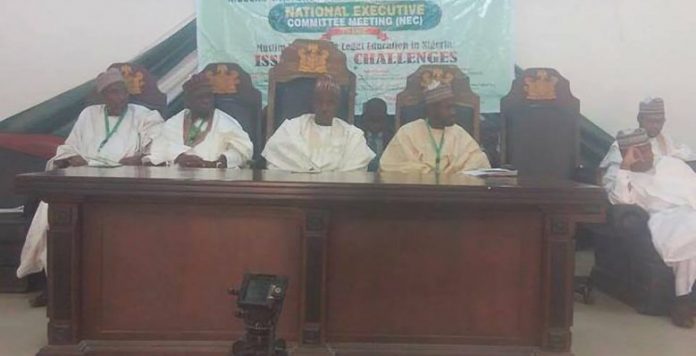 The National Executives of the Muslim Lawyers Association of Nigeria (MULAN) held an extra ordinary general meeting between 22nd and 24th December 2017, at the Justice Umar Farouk Abdullahi Auditorium, Justice Muhammadu Bello High Court Complex, Katsina, Katsina State. The meeting which had in attendance dignitaries from in and around the state including the Executive Governor of Kastina State, His Excellency, Rt. Hon.  Aminu Bello Masari discussed several issues affecting both muslim and non muslim lawyers generally. The NEC used the opportunity to also led their support to Amasa Firdaus praising her courage and defiance in standing up for her rights and adhering to the tenets of her religion

Below is the communiqué issued by the MULAN NEC at the conclusion of its two day meeting in Katsina.

Dr. Kamal Alhaj Dawud the National President of the Association appreciated the effort of the newly created Kastina Branch of the association. He acknowledged the efforts of all the members who saw to the successful hosting of the NEC/AGM, he encouraged all lawyers to rise up to the challenge of ensuring the peaceful co- existence of all Nigerians with respect and obedience to the rule of law.

He further stated that Muslim Lawyers must ensure that the Legal System particularly in areas were muslim remain a majority must conform with Islam, he advocated that Muslims Lawyers must make meaningful contribution towards the realisation of the implementation of sharia most especially in the states that have introduced ; and also its agitation in Western Nigeria, the minimum being the recognition of Islamic personal laws on willing Muslims.

Members were urged to view democracy from the Islamic viewpoint and encouraged to participate in politics at all levels, including the Nigeria Bar Association.

Justice Musa Danladi Abubakar in his remarks took into cognisance the global discrimination, persecution and injustice perpetuated against Islam and Muslims despite the universal declaration of Human rights and the constitutionally guaranteed freedom of religion and freedom of association. He urged Muslims not to be perturbed by the recuring global persecution but to hold on tenaciously to the tenets of Islam.

Alhaji Ibraheem Yakub Umar, in his remarks noted the sad recent perception about lawyers as a group of people protecting the guilty evidenced by lawyers delaying justice, thereby tying the hands of the judiciary, lawyers more particularly those in position of authority are encouraged to ensure that they return to being the last hope of the common man. Muslim lawyers were called upon to make this difference by rising above the current situation and refraining from defending brazenly corrupt individuals and to remain steadfast in stamping out injustice even when it is done to non Muslims.

The Executive Governor of Katsina  Rt. Hon. Aminu Bello Masari urged Muslim lawyers to work closely with their communities so as to  understand and address the issues of the peculiarities of various communities as it will go a long way in resolving the fundamental issues in the restructuring debate plaguing the Nation, because the issues of Kastina State might not be that of Akwa Ibom. The call and agitation for Sharia in Adamawa should not be the source of migraine for Enugu and or Bayelsa.

He further called upon the federal government to practise and encourage true federalism and refrain from local issues like primary education. While he agreed that the federal government can set policies of a general nature  such policies must take into cognisance the peculiarities of the federating units.  He concluded that the independence of the Judiciary should be further strengthened with fiscal independence of the Judiciary

Muslim Lawyers must stand up against the evils in the society, promote the rule of law, encouraged Muslims to understand that Islam as a religion enjoins them to strive to be above board.

Dr. Ibraheem Abikan in his address began with the recognition of the fact that Islam is a religion of knowledge which encourages Muslims to seek knowledge from all over the world He recognised that the crucial foundation of our legal system in Nigeria is the Received English Law but even the United Kingdom has since moved away from the foundations our leaders tenaciously hold on to.

He made allusion to the irony of the National University Commission grudgingly accepting the teaching of Islamic law in Nigerian Universities despite the fact that Islamic Law is a fundamental source of our legal system which is even thought in other jurisdictions, UK inclusive. He called for an updating of the curriculum of our madaris specialising in Islamic education with the contemporary educational methods.

He stated that the issue of the Hijab has been on even before 1979, and that erudite non Muslim lecturers like Prof Popoola of O.A.U despite the current hardliners and dissenting views had opined that the legal system in Nigeria is for Nigerians and all its features including the dress-code which must be suited to fit Nigerians.

He concluded that MULAN as an association of legal practitioners must be strategic in seeking redress for the violations of the rights of Muslims, and called for a collective and brotherly approach, forging together as a united front.

Discussing the issue Hajia Dr. Fatima M. Jibo noted the irony of Amasa Firdausa an aspirant to the bar, who had on her a hijab in accordance with pristine Islamic standards to cover her hair in deference to the strict regulations of the Council of Legal Education was not called to bar. She challenged Muslim lawyers and judges to rise up to the occasion to see that justice is done. She equally frowned at the reduction of Shariah to just Islamic personal law.

MULAN appreciates the support and participation of everyone towards the success of the Meeting. May Allah (SWT) return all to their various destination safely and reward all abundantly.

And the end of our affairs is: Alhamdulillah Rabbil Alameen.