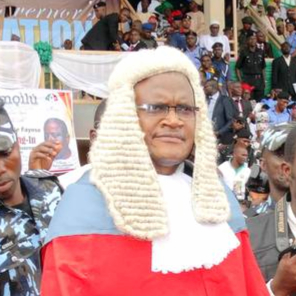 He described such action as “very dangerous to the fight against corruption”.

Daramola regretted that some lawyers, who should be officers in the temple of justice, ferried bribes to judges, contrary to the ethics and tenets of their profession.

The CJ spoke yesterday in Ado-Ekiti, the state capital, at the beginning of this year’s Law Week organised by the Ado-Ekiti branch of the Nigerian Bar Association (NBA).

He spoke on the topic: Corruption: Origin, Effect and Mechanism for Curtailment.

Daramola noted that though he held unflagging belief that the legal profession should not be rubbished, he opined that people working in the temple of justice must shun any form of inducement as well.

Daramola said: “In the last one year, the legal profession has been the butt of ridicule and jokes due mainly to exposure of involvement of judges and lawyers in corruption cases that were primarily geared to obstruct and pervert justice.

“Lawyers like Mafia Bookies and shacks, have become bagmen who now ferry bribes to judges. It is almost an impossibility for litigants to bribe judges without active involvement of lawyers.

“The Bar and the Bench have become the focus of state agencies empowered by law to wage war against corruption. There have been insinuations in certain quarters on either ground or misguided belief that the executive is deliberately waging war against the Judiciary.

“I rather don’t believe that is the issue. As much as I believe there is no perfect institution in the world, for credibility sake, the judges, like Caeser’s wife, must nevertheless be above board.

“It is high time we judicial officers understood that we cannot compete with politicians in wrongdoings, because that may put such officer to a point of no return, as politicians who committed similar offence may go to jail and come back to be elected or appointed.