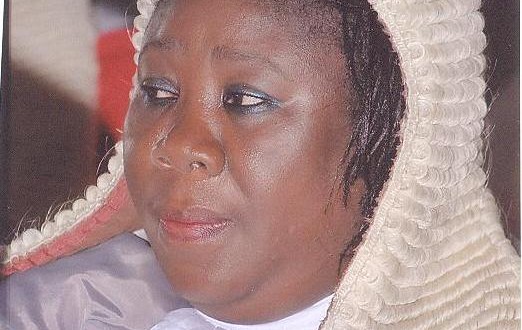 The Nigeria Bar Association, Ilesa ranch, has filed a contempt proceeding against the Chief Judge of Osun State, Justice Adepele Ojo, for her refusal to obey the order of interim injunction granted by a Federal High Court in Osogbo to maintain the status quo in the case filed to challenge the hike in filing fees in courts throughout the state.

Counsel to the NBA, Ilesa branch, Mr. Olayinka Sokoya, who made the notice of consequence of disobedience of the order of court available to our correspondent in Osogbo on Monday said the association filed forms 48 against the CJ in court earlier in the day at the Federal High Court, Osogbo.

The state government had increased the filing fees and the lawyers, who opposed the move, sued the governor and the CJ to court.

The court granted an order of interim injunction that status quo be maintained.

Sokoya said it was worrisome that the CJ disobeyed the order of the court, saying the NBA had no option than to file contempt proceeding against her.

The notice read, “Take note that unless you comply with the order of this Honorable Court delivered in this case on March 8,2017 by Honorable Justice Maureen Onyetenu as follows :

“That an order of interim injunction restraining the second to seventh defendants either by themselves, the officials, agents, privies or any other person claiming by or in trust for them from giving effect to the content of the circular dated 24th February, and signed by Taiwo Jacob (Principal Registrar, Litigation of the High Court of Osun State) pending the hearing and the determination of the motion on notice filed in this suit.

“That the status quo ante be maintained and also orders the suspension of all proceedings, actions, implementations of the circular dated February 24,2017 and signed by Taiwo Javob ( Principal Registrar, Litigation of the High Court of Osun State) on the directive of the 7th defendant pending the hearing and the determination of the motion on notice.

“That you will be guilty of contempt of court and will be liable to be committed to prison.”

Based on the disobedience of the court order, Sokoya said the NBA had directed that lawyers should resume court boycott in the state.

He said, “Please be informed that the court boycott continues and no lawyer is permitted to appear in any court in Osun State till further notice.

“It is so sad that a court has refused to obey an order of a court of competent jurisdiction. If this culture is allowed to continue, it will snowball into anarchy and pandemonium. The action of the Osun State High Court by refusing to obey the order of the interim injunction served on them is inimical to the substance of the judiciary.”