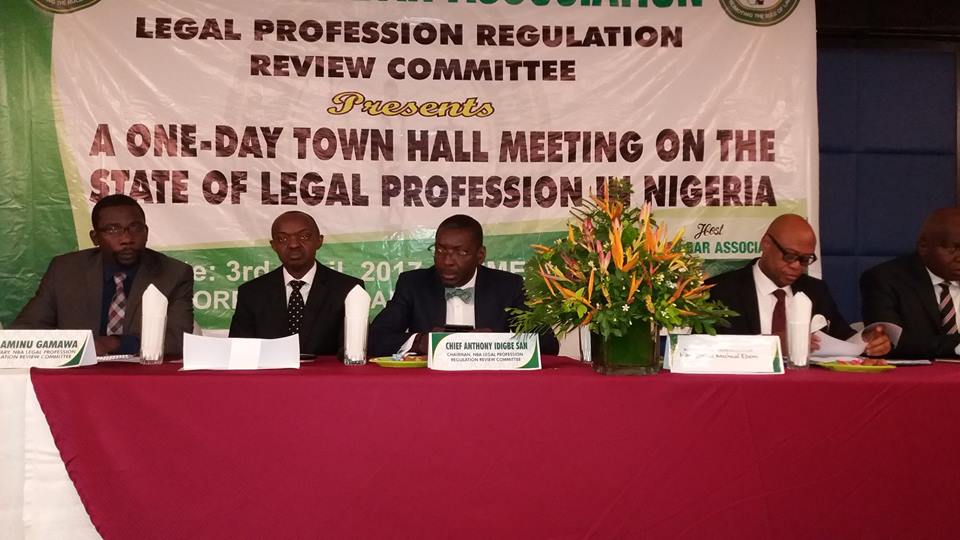 The Nigerian Bar Association (NBA), through its Legal Profession Regulation Review Committee (LPRRC) held its third Town Hall Meeting designed to examine THE STATE OF THE LEGAL PROFESSION IN NIGERIA on Monday, April 3, 2017. The one day event which held at the Transcorp Hotels Pearl Ball Room in the city of Calabar, Cross Rivers State recorded a huge attendance of the members of the Bar and the Bench.

The Acting Chief Judge of Cross River State, Honourable Justice Michael Edem together with all the Magistrates in the state attended this crucial town Hall meeting. Legal luminaries from across Cross River State including the Director of Legal Services of the Nigerian Army in Calabar, and Comptroller of Prisons of the State, graced the occasion. Lawyers, both senior and young, drawn from the three NBA branches of Cross River State; Calabar, Ogoja and Ikom, were in attendance. Also in attendance were students from the University of Calabar Faculty of Law.

Upon the delivery of the opening remarks by the Chairman of the LPRRC, Chief Anthony Idigbe, SAN, and reeling out the antecedents of the Committee from inception, Dr. Aminu Gamawa, Secretary of LPRRC, gave a progress report on the committee’s work; noting that “We are on a rescue mission. The legal profession is key to national development.  If Nigeria is to make meaningful development, then our legal profession must be strong enough to support it. The question is: is our system of legal education strong enough to give us the profession of our dream? I’m glad that students are participating in this Town Hall Meeting because we are really doing this for you because the future belongs to you. This project is not about us, it is about the profession. What we are trying to do is to make the profession better for all of us”; the interactive session commenced in earnest.

Professor Agom, who stood in for Mrs. Funke Adekoya, (SAN), (Chairperson LPRRC sub-committee on Current State of the legal profession), opened the floor when he gave an overview of the current state of the legal profession – from the perspectives of its regulatory architecture, welfare of lawyers, organs responsible for regulations, like Body of Benchers, and NBA. He also examined the percentage of lawyers available to service the Nigerian population. “As at 2016, there were 105,000 lawyers to service 170 million Nigerians,” he said. “This gives a ratio of one lawyer to 1,619 Nigerians. With this current empirical statement, it is difficult to say that Nigeria is being over-lawyered.”

He said there was need for ethical training as a prerequisite for entry into the legal profession.

He also stressed the need for licensing as in Ghana where law firms were licensed yearly. He then asked the rhetorical question: “Do you find payment of practice fee adequate without any supervision? He said the Current State surveys showed that “the level of literacy among lawyers – at the level of university and law school.” He asked if participants in the town hall meeting would prefer to continue with the use of wig and gown or to jettison it. He also told the meeting that the Current State committee found that the role of Attorney General in the regulation of the law profession was pervasive. Finally, he said that NBA’s constitution provided for continuous professional training, but this was hardly actualised.

Professor Ernest Ojukwu, SAN, Chairman LPRRC Future State Sub Committee took the floor and told the meeting that his team discovered fragmented institutions which should be harmonised if the regulatory architecture would take the legal profession to the future state. In this regard, he identified the Body of Benchers, Council of Legal Education (CLE), Legal Practitioners Disciplinary Committee (LPDC), and Legal Practtitoners Privileges Committee (LPPC). In the Future State, a Legal Council of Nigeria would be created to restore the confidence of the public. The Council would harmonize the functions of existing organs like Body of Benchers, Legal Services Committee, Legal Aid Pro Bono Committee, Education and Training Committee, Young Lawyers and Career Committee, Privileges Committee, and Law Reform Committee. Other functions that would be taken care of by the Council would include licensing of law firms, pupilage, stamps and seal, paralegals, Notary Public, and so on. He also said that a Council of Legal Education would demarcate between council of Legal Education and the Nigerian Law School, apart from supervising matters relating to law school, staffing, organisation and management, the multi-campus system and conditions of service, among others.

Honourable Justice Michael Edem, the Acting Chief Justice of Cross River State, enthused excitedly that “This (Town Hall meeting) is a well-thought-out idea; and, it could not have come at a better time than now.  Here is a time when the legal profession has become endangered. Here is a time when all the glory and honour are fast nose-diving.”

In quick succession, the chairmen of the three NBA branches – Calabar, Ogoja and Ikom gave their goodwill messages. First was, Williams Anwan Esq., Chairman, NBA calabar: “When I called on the Acting Chief Justice of Cross Rivers, Honourable Justice Michael Eden, our own ‘Power Mike,’ that he was invited to the Town Hall meeting, he said he would not only come personally, he would send circular shutting down the courts for the day and ensuring the Magistrates, court officials, all stake holders attend.

Richard Ogbechie, Esq., Chairman NBA Ogoja said: “What we are doing today is a threshold issue. We from Ogoja NBA align ourselves with the LPRRC in the efforts to reposition the Bar and render better services especially in these times of dangerous democracy. ”

Next, Obo Agbor Anthony, Esq., Chairman, NBA Ikom branch said: “I greeted the invitation to this meeting with joy. Numerical increase in lawyers has led to a corresponding increase in professional misconduct and sharp practices. Again, proliferation of law schools has not helped in maintaining quality of legal education. What business has a university of agriculture to do with law? What business does a university of technology to do with law? Why should parents force their children to read law? We, in Ikom branch, are very resolute in the discipline of erring lawyers.”

Dr. Sunny Usoro of the faculty of law, university of Calabar said that the combined office of Minister of Justice and Attorney General of the Federation should be separated. “The separation makes for professionalism, accountability and more concentration,” he said. “The office of Minister is political while that of Attorney General is a professional calling. While office of the Minister should be the choir of the Executive, that of Attorney General should be from the Judiciary and have a tenure of three or four years in the first instance. Which is renewable for not more than two terms based on satisfactory performance.”

A student of University of Calabar, Lukpata Ogbekieran called for a reform of the Nigerian Law School to ensure the quality of graduating lawyers.

A young lawyer who practices in Calabar, Daniel Kip, expressed disappointment against the intrusion of estate agents and surveyors into the registration of landed property; a job which he said should have been preserved for young lawyers. “I think we need to spell out the scale of charges,” he said. “For instance, doing a Deed of Conveyance for a land bought for N10 million, and the lawyer charges 10% of cost of transaction to do the conveyance and the client refused to pay, agreeing to pay a paltry sum of N30, 000. The lawyer refused only to discover that a desperate lawyer would even do the thing for N5, 000. He argued that there should be an NBA-clearing house or authentication platform which would permit only practicing lawyers to carry out such services.

Dr. Victor Offiong, an adjunct lecturer of the University of Calabar raised the issue of mandatory deposits. He noted that a lawyer was sanctioned in Britain for a lapse in this regard, but has never seen any lawyer sanctioned for the same reason in Nigeria.

Mrs. Cordelia Eke, Secretary, NBA Port Harcourt branch raised the issue of regulation. “I think there is need for us to review a lot of regulations,” she said. “We should take a look at every document; the Legal Practitioner’s Act (LPA), for instance.  There are so many legislations, by-laws, and make sure we get them right, especially to resolve the contradictions in some of them. We shouldn’t wait for someone to go to court to draw our attention to them. As lawyers, we need to do things properly. Secondly, we should institutionalise things we do regularly. For instance, in the administration of national conference, so much is left to the discretion of national officers. This should not be so.”

The Comptroller of prison, Calabar, told the meeting that “nobody should blame the prison when the awaiting-trial out-numbered the strength of accommodation designed for the prison. These awaiting trial persons do not access the reformatory system of the prison – but are still like the property of the Bar and the Bench.

Chief Assam Assam, SAN, argued that the ongoing process of legal profession regulation review should be thorough, and not rushed, so that justice could be done to the exercise. He lamented the usually poor use of English language demonstrated by some lawyers. “English language is studied basically at the level of lexis and structure in secondary school,” he said. “In the university, it becomes applied. And, if the standard was poor in the secondary school, there is no way you can change it in the university. That is why university students have formed an ingenious method of communicating since they do not understand why they should bother about Queen’s English. It’s unfortunate because this reflects in the drafting of documents. For example, a draft statement of claims has a ‘texting’ language as part of it. In this case, government is written as ‘govt’. So, a person who fails to have quality education should not be admitted to read law. Next is the Law School. I was shocked to hear that exams leak in Law School. And, I have been waiting for the Council of Legal Education (CLE) to inform us of persons standing trial in Court for the examinations which were leaked. But this has not been the case. More needs to be done.”

The Town Hall Meeting had, earlier on, observed a one-minute silence in memory of the late Chief Justice of Cross Rivers State, Honourable Justice OkoiIkpi-Itam. 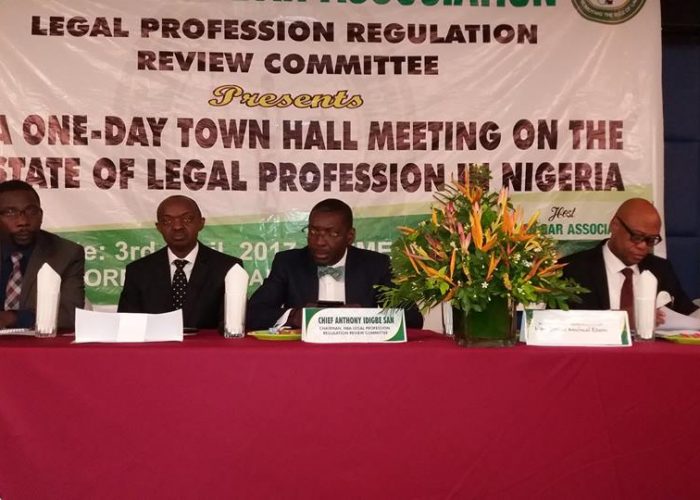 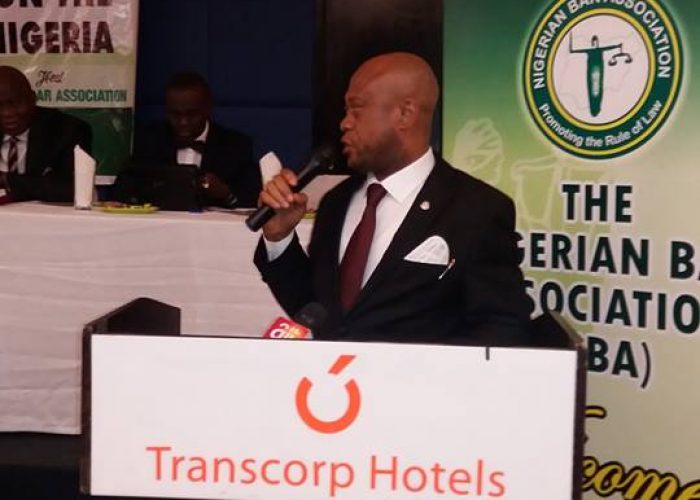 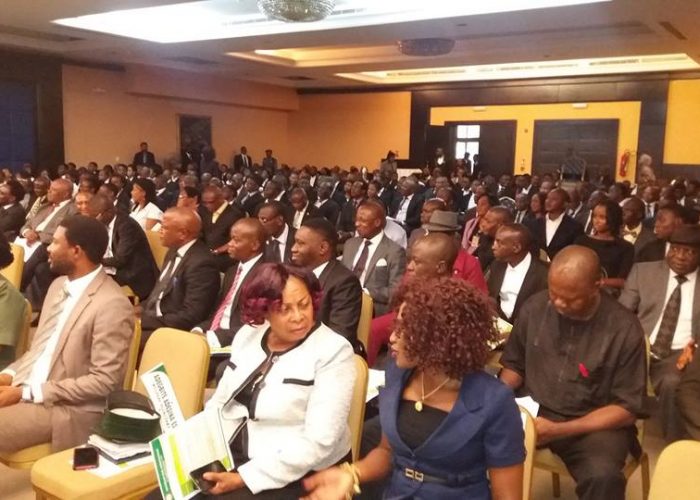 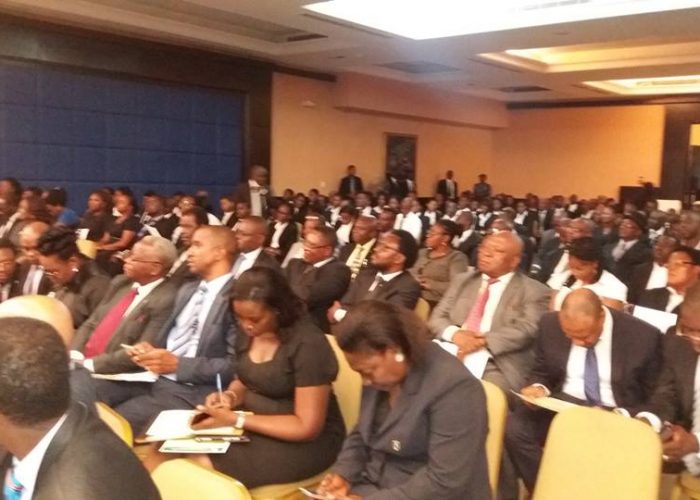 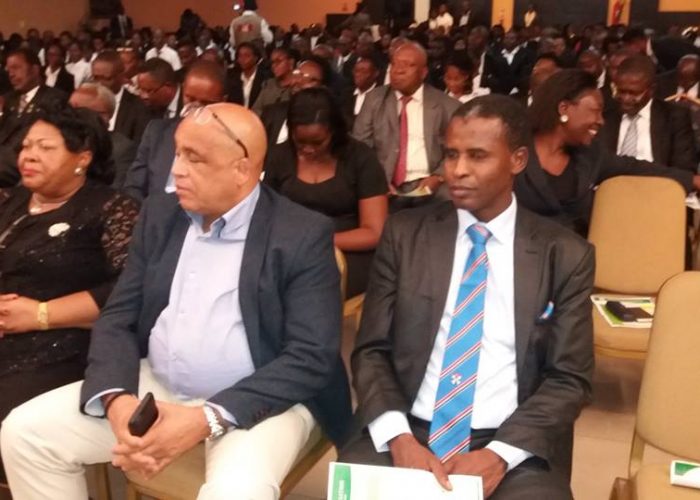 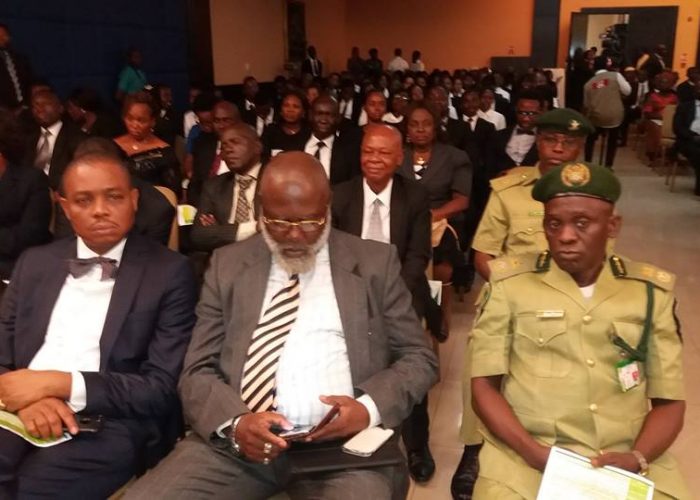 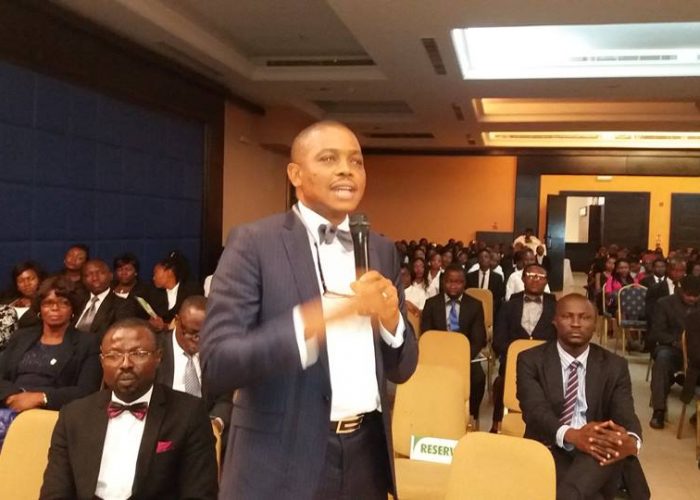 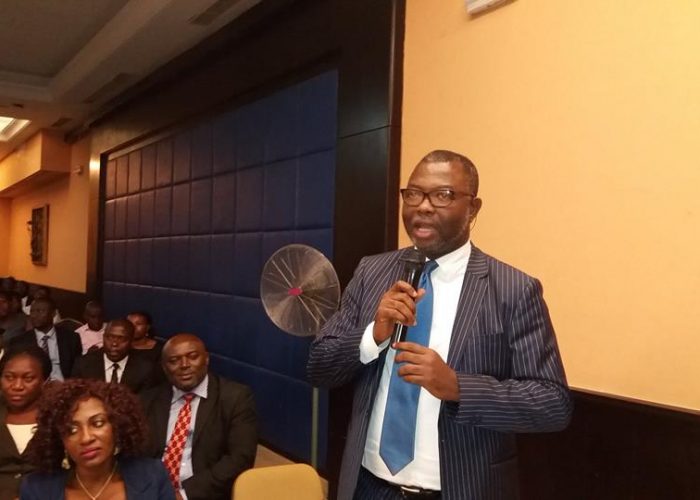 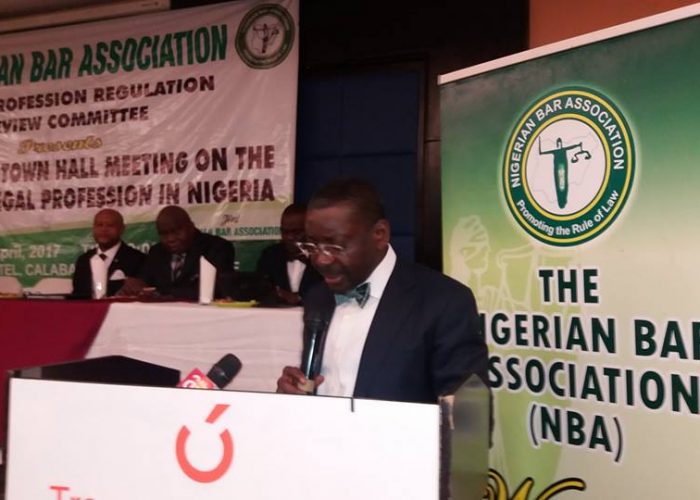 From the Office of the President of the Nigerian Bar.