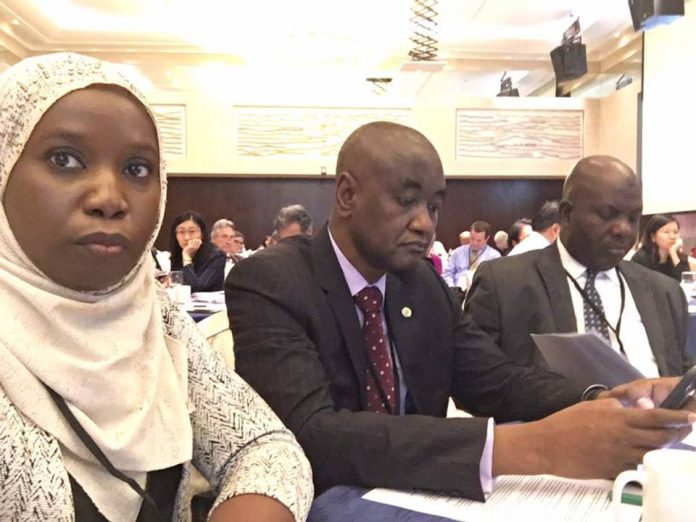 The need to have a well regulated legal profession that will gain the respect of consumers of legal services and advance public interest was the focus of a two day International Conference of Legal Regulators in Singapore, 5-6 October 2017 where the President of NBA, AB Mahmoud, SAN joined the world legal regulatory community to discuss the myriads of issues germane to regulatory reforms. The conference, which held at the magnificent Carlton Hotel, attracted participants from advanced jurisdictions.

Speaking as a Panelist in a session on effective new regulatory responses to complaints, the NBA President informed the world audience of the efforts the NBA is making to reform the regulatory architecture of the legal profession in Nigeria. Mr. Mahmoud who made Regulation one of the four cardinal programs of his administration gave a synopsis of the Disciplinary procedure in Nigeria and sought collaborations with the world body in his effort towards entrenching a transparent, speedy and fair outcome of all matters of professional infractions.

Earlier, the moderator of the session, Susan Saab Fortney, a Professor and Associate Dean of Research, Texas A&M University School of Law USA, shared her multi-jurisdictional research experience on the issue of regulation. She posited that the legal profession in the new world order must self-regulate itself in order to effectively play its pivotal role.

The President of the Law Society of Singapore Gregory Vijayendran gave a vivid exposition of the 4 -tier disciplinary processes in his country. According to him, the process is commenced with a complaint lodged with the review committee, which serves as a filter mechanism for all complaints. The review committee then transmits its report to the inquiry committee (reminiscent to the Zonal Panel in Nigeria) which duty is fact finding. If the complaint is found to be meritorious, it is further escalated to the disciplinary tribunal, which is a trial body. The law Society acts as prosecutor at the tribunal. The tribunal determination will then be sent to the court of 3 Judges where the lawyer will “show cause” why he/she should not be sanctioned. Unlike in Nigeria where there is no time limit, the entire process in Singapore takes a maximum of 12 weeks to conclude. The statute (Legal Profession Professional conduct rules 2015) prescribes timelines for every stage of the process which timeline cannot be extended. Serious sanctionable offences in Singapore include taking pictures in Court, Inappropriate dressing and breach of professional confidence.

In Ireland, the entire disciplinary regulation resides with the law society. According to John Eliot, who is the Director of Regulation of the Law Society of Ireland sanctionable offences include “inappropriate attire, misconduct in court and “adverse judicial feedback on legal practitioners”. The Irish regulator informed the conference that the law society imposes stringent conditions for practice of law and that practice certificates are issued to only lawyers found to be fit and proper by the society.

In England, the Legal Ombudsman has about 250 staff in her department. Dr. Vanessa Davies the Director General of the Bar Standards Board said a total of 7,000 complaints were treated in 2016. She reported that the department is not an appendage of the legal profession but an independent body. In a follow up conversation with the NBA delegation, she was delighted to hear about regulatory reform efforts of the AB Mahmoud NBA administration and extended an invitation to meet with the leadership of the Bar in London in November when the later trade mission visits the UK.

The conference clearly brought out the synergy that must exist between the judiciary, the official bar and the private bar if the legal profession in Nigeria must get rid of the bad eggs in its midst. The NBA President with his delegation which includes Chief of staff to the NBA President; Muritala Abdul-Rasheed Esq, National Treasurer; Aisha Ado Abdullahi, Technical Assistant to NBA President Ibrahim Abdullahi, Representative of the Chairman Legal Regulation Review Committee Otojahi Eric Esq and Mrs. Sarah Omega-Ajijiola; Director Bar Services of the NBA, will be leaving Singapore for Sydney Australia in the early hours of Saturday 7th October 2017 to attend the IBA conference holding at the Australian Capital from 8th-13th of October. The OPNBA media team promises to file live reports from the Information Center in Sydney.

ALSO READ   I know nothing about the Alleged Query on Aliyu Umar, SAN - NBA President

NBA-AGC 2017: NBA President Rang the Closing Bell at the Stock...