Home News NBA President, on Strategies to Fight Corruption in the Judiciary 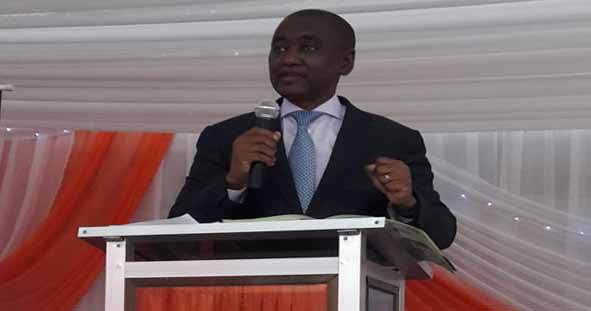 The President of NBA Abubakar Mahmoud SAN had a professional chit-chat with lawyers in Oyo State on matters affecting legal practice in Nigeria.

The interactive session held at Oaks Hotel, Bodija, Ibadan was used as an avenue to brainstorm lots of issues affecting the legal profession – integrity- especially in the face of corruption finger-pointings at the Nigerian judiciary.

The session also raised the urgent need to institute regulatory framework and revealed what the A B Mahmoud-led administration had been doing to regulate legal practice in Nigeria.

“Every body had been startled by what happened last year in this country.” says Mahmud.

“I have been really bothered by the arrest of some judges and justices towards the end of last year. This was why we said that any judge who had been accused of corruption with evidence of huge money found in his house should step aside.” he went on.

” You cannot have allegation of corruption hanging over your neck and still sit in judgement over other people in Court of Law. That is not tidy.”

“We have constituted a technical committee to look into the complexity of the situation and come up with recommendations. Dr. Olisa Agbakoba, SAN is the Chairman of the committee.”

” I want this meeting here to examine the issues critically. Tell ourselves the home truth. “We all know what is happening in the legal profession. I mean in the Bar and the Bench. In those days when you said you were a law student, it earned a lot of respect. But, that is no longer the case today.

” We are focusing on four thematic areas of reform – regulation, representation re-engineering and public interest. Now that we have over 105 ,000 lawyers practicing across the country, it has become expedient to have mechanics of regulatory framework that controls the practice of the profession.

“Hitherto, the Body of Benchers had been saddled with this responsibility. But, reality has shown that the job needs a bigger control.

” If you look at the Legal Services Act in Britain, you find that there over 400 sections. The point I am making is that the task of regulations is a onerous one.”

” The Body of Benchers are about 240 members and about 95 of them are elderly people. This is quite apart from the Attorneys General in the 36 states, that makes up to 72. But these are extremely busy people.

“I think we have to move away from that and involve professionals who are highly competent in the technical responsibility of regulating the legal profession.

“Another key issue is one of entry point into the profession. We have to sit down and talk about this.”

Yet, another one is the form of examinations – the law exams and ethical exams. I don’t think that you go through the law school and think you have what it takes to be an ethical lawyer. “I think we have to sit down and think about this.

” The next area we are looking at is the responsibility of the Bar to its members. Obviously, there are a lot of issues here. If we look at the state of our Bar and see what is going on around the world we see a world of difference. We have to examine the responsibility of NBA to its members in terms of job creation and revenue generation. What are the mechanics for doing this?

ALSO READ   CJN To SANs: You Can’t Be On Supreme Court Bench

“We have to examine the mechanics for delivering benefits to members. Some complain that they pay annual dues and service charges but they hardly see benefits.”

The President advocated for better welfare for young lawyers by law firms, in the areas of mentoring and opening up opportunities for professional advancement.

In his speech Chief Niyi Akintola SAN, lamented that there is hardly any job left for lawyers to do outside Election Petition cases and called on members to align themselves with international law firms who are beginning to make inroads into Nigeria’s service industry.