The Nigerian Bar Association Section on Business Law (NBA-SBL) invites lawyers is to the Muson Centre in Lagos on Thursday, September 7th, 2017  to see a play,  ‘Just an Ordinary Lawyer’.

The Play written and produced by Tayo Aluko (brother of the Late Bankole Olumide Aluko (BOA))  is about Tunji Sowande, who left Nigeria to study law in Britain and who in 1968 became the first black head of a major barrister’s chambers.

Although more diffuse than its predecessor, it is a fascinating show that interweaves politics, music and Sowande’s abiding passion, cricket.

Aluko exploited the fact that 1968 was a turning point in Sowande’s legal career to bring together the themes that animate the show.

We are reminded of that year’s internal conflicts in Africa that were part of the imperialist legacy, of the assassinations of Martin Luther King and Robert Kennedy and of the black power salute by two African-American athletes at the Mexico City Olympics.

Several acclaimed publishers have reviewed the play ‘Just An Ordinary Lawyer’, globally.     The Week Review gave it a 5-Star rating and described it as, powerful, informative, humorous and captivating.

It got a four-star rating from The Guardian as it described it as fascinating. Counsel Magazine called it brilliant, saying it creates the picture of a remarkable, humane and forgiving man, while the Monday Magazine, Victoria, BC, Canada referred to it as a brilliant piece of theatre.

Nigerian-born Tayo Aluko, a Writer, Performer, Producer, is based in Liverpool, UK, where he worked until early 2009 as an architect and property developer, with a special interest in eco-friendly construction.

It promises to be an evening of fun and relaxation. 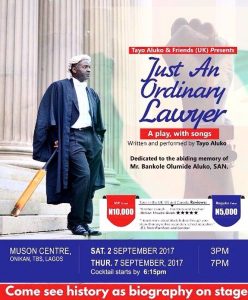 Photos: A Day of Tribute in Honour of Late R....

FIDA: We Have Prosecuted, Jailed 20 Rapists in Ekiti